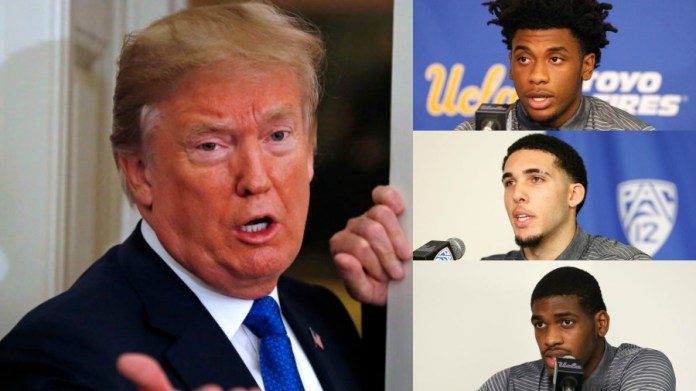 We have no reason to believe anything Donald J. Trump says, including his claim that he rescued the three UCLA basketball players who reportedly caught a case in China for stealing sunglasses from a Louis Vuitton store.

Trump is a habitual liar and a racist, and Black folks really don’t have to believe anything this man says.

Already, Donald Trump is fresh off his Asian tour–where he has almost certainly embarrassed himself and the country and brought us even closer to getting killed–and he is looking for something, anything, to take our attention away from the corruption, incompetence and possibly criminal wrongdoing of his administration.

Of all the important matters facing a so-called commander-in-chief, Trump returns doing what he knows best– tweeting about foolishness. His latest is a demand the UCLA basketball players thank him for saving them from years of incarceration:

First, a note about the alleged act. If it’s true, that was dumb. Really dumb. You know Black men catch enough hell in this country, but in a foreign country? And China? You should’ve watched enough episodes of MSNBC’s “Locked Up Abroad” to know they don’t play that. But with that said, let’s move on.

Let’s just assume for a moment that Trump did play a role in having these young Black men released and back in the warm embrace of Uncle Sam, where they can easily find police to arrest them for things they did not do. “Saving” these Black college athletes does not undo his role in ruining five others. I speak of the Central Park Five, who spent years behind bars for a crime they did not commit. Trump did his best to whip people into a frenzy back in 1989, when the five Black and Latino teens were arrested for the brutal rape and beating of a white woman in Central Park. The lynch mob wanted blood, as they sought justice against the marauding wolf pack of Black boys and their “wilding” ways. He took out ads in the major New York City dallies calling for a return to the death penalty in New York. And even to this day, not only did he not apologize for his role in that racist mess, he still maintains they are guilty.

Proving the orange doesn’t fall far from the tree, Trump’s father was arrested at a Ku Klux Klan rally and brawl with police in Jamaica, Queens. Trump has a long history of racism. The Justice Department’s Civil Rights Division sued him for racial discrimination because his real estate company refused to rent to Black people.

Trump helped birth the Birther movement by promoting the fallacy that President Obamawas not born in Hawaii and that his birth certificate is suspect. It was a blatantly racist campaign for those who did not like the Black president because he was Black. And with that, Trump built his racist voter base, and made the case why he was the candidate for white nationalism.

He waged a campaign based on intolerance and racial hatred of Latinos, Muslims and Black folks. His campaign rallies were hate crimes. He stacked his cabinet with white men, and turned to real-life Klan and Nazis as his advisers. As leader of the country, he praised the “fine people,” the white supremacists who marched on Charlottesville carrying tiki torches and plowing into a crowd of peaceful protesters, killing one woman and injuring others. And he responded to the hurricane devastation in Puerto Rico and the Virgin Islands by throwing paper towels to a crowd of victims, you know, for fun.

That’s why we don’t have any reason to take Trump at his word when he says he personally intervened on behalf of those players. Then there’s the fact that he takes credit for so many things in which he has absolutely no role. After all, Trump promised he would create jobs and new factories, and return the coal mines to the poor white folks in Appalachia–and they’re still patiently waiting. This was the man who said he would build that wall and get Mexico to pay for it. He even promised to release the JFK files.

That’s not how ANY of this works. That’s why we can’t take Trump on his word, and don’t believe anything he says. But we do believe he must go.