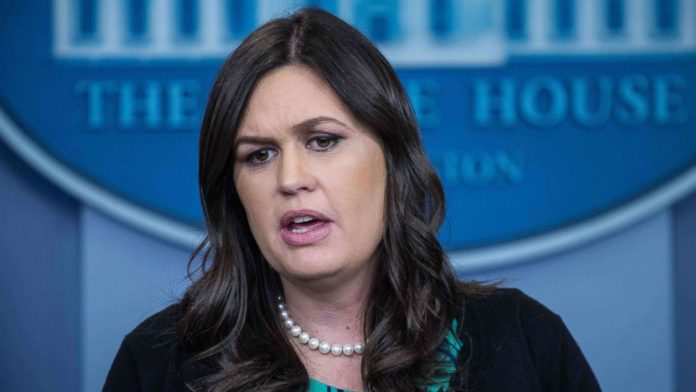 The White House distanced itself Wednesday from the debate over police shootings of African Americans, saying issues regarding law enforcement are best left to the local communities involved.

Press secretary Sarah Sanders was asked in the daily briefing about the case of Stephon Clark, who was fatally shot by Sacramento police earlier this month and whose death has sparked multiple protests in the city. According to Sacramento Police Department body cam footage, Clark was unarmed though police could be heard on the footage yelling, “gun, gun, gun” as they fired a combined 20 shots. Police were responding to reports of someone in the neighborhood breaking car windows, and say Clark ran from officers when a police helicopter arrived at the scene.

While Sanders described the situation as a “terrible incident,” she said dealing with them is “something we feel should be left up to local authorities.”

“Certainly, we want to make sure all law enforcement is carrying out the letter of the law,” Sanders said. “The president is very supportive of law enforcement. But at the same time, in these specific cases and these specific instances, those will be left up to local authorities to make that determination and not something for the federal government to weigh into.”

Pressed later in the briefing by a reporter on whether the president is showing an absence of leadership on the issue, Sanders pushed back.

“We want to find ways to bring the country together,” Sanders said. “Certainly not looking for any place of division.”

When asked what her message would be to the African American mothers who might fear for the lives of their sons and daughters, Sanders said the president doesn’t draw a distinction between race when discussing the need to protect Americans.

Her explanation comes as the president has been all but silent on the issue since taking office, with the exception of holding various events where he has urged a “law and order” crackdown and even told police officers to not “be too nice” to suspects they are arresting.

Separately, the claim that the president has been hesitant to weigh in on local law enforcement issues runs counter to his calls in 2017 to “send the feds” into Chicago to patrol the most dangerous areas.

The Obama White House had a similar reluctance to weigh in on a spate of police-involved shootings of African Americans, citing both the idea of influencing ongoing investigations as well as former President Barack Obama acknowledging the political sensitivities of adding his voice into the fray.

In the wake of the shootings of Alton Sterling and Philando Castile in 2016, though, Obama said he considered them emblematic of some of the wider “racial disparities” in the criminal justice system.

“This is not just a black issue. It’s not just a Hispanic issue,” Obama said. “This is an American issue that we should all care about, all fair-minded people should be concerned.”