Blacks are more likely than whites to sleep less than seven hours a night, and the sleep disparity is greatest in professional occupations, according to a study from Harvard School of Public Health that appeared in the American Journal of Epidemiology.

“With increasing numbers of Blacks entering professional and management roles in numerous industries, it is important to investigate and address the social factors contributing to the short sleep disparities in Blacks compared with whites in general, and particularly in professional settings,” said lead author Chandra Jackson.

After adjusting for factors such as age, demographics, health behaviors, physical activity, medical conditions, and socioeconomic status, the researchers found that among Black respondents, 37 percent were short sleepers, compared to 28 percent of whites.

In addition, Blacks are more likely than whites to do shift work, often at night, which can disrupt circadian rhythms and increase their appetite for sweet and salty foods. They are also more likely to live in urban neighborhoods with high noise levels at night.

It’s also possible that a strong desire to succeed against all odds could lead to stress, disrupted sleep and negative health effects. 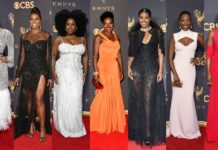 Black girl magic at the Emmy’s