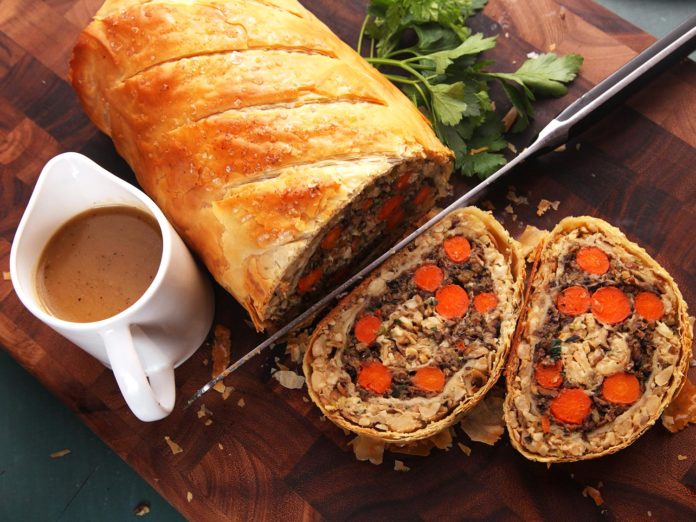 Thanksgiving is almost here, and while many of us will be gathering around a feast featuring collard greens with ham hocks, macaroni and cheese, buttery mashed potatoes, billowy dinner rolls and, of course, turkey—possibly even a deep-fried one—some guests may have adopted a restricted diet that avoids gobbling down some of these tasty holiday staples. So, whether it be for health or ethical reasons, here are some tips and recipes to help you make Thursday’s meal vegan, vegetarian and gluten-free friendly.

How to Be the Host With the Most

Your cousin is vegan, your daughter is gluten-free and she’s bringing home her vegetarian boyfriend—what’s a host to do? Well, the turkey can stay for the meat-eaters, and adding a few more veggie sides to the menu will appease the plant-based gang. However, the best tip to satisfy almost everyone is to keep things simple.

Eliminating sugar, dairy and wheat in side dishes will have all of the above thankful for your mindfulness without having your unrestricted guests praying for more flavor during the Thanksgiving prayer. Speaking of simple, another easy way to please the crowd is to ask those with dietary restrictions to bring a dish to dinner. Sharing their diet with others is appealing to most, so don’t consider this request rude.

How to Be the Best Guest

With that said, if you follow a restricted diet, you are most likely accustomed to bringing your own dishes to group gatherings. So, if you’re worried about the host not accommodating your needs, then up the giving ante this Thanksgiving by bringing a side or two.

A roasted butternut squash and apple soup is a wonderful vegan fusion of fall’s favorite flavors. Or, if you want to stick to a staple, Hummusapien’s vegan green bean casserole not only looks like the real thing, it tastes like it, too.

Cheers to Cocktails That Everyone Can Drink

Not all spirits are created equal. In fact, depending on how or where they are made, many wines and beers don’t qualify as vegan and/or gluten-free. Beer, due to the hops, barley and other ingredients, is not gluten-free. However, a good old cider is a great gluten-free beer alternative.

And while wine, thanks to yeast, is just fermented grapes (and both ingredients vegan-friendly), not all wines are vegan or even vegetarian-friendly depending on how the wine is clarified. This process is called “fining” and can utilize agents such as casein (a milk protein), albumin (egg whites), gelatin (animal protein) and isinglass (fish bladder protein). So while most vegetarians don’t mind this inclusion in the fining process, vegans do.

Either way, don’t stress over what vino to serve Thursday. Vegan wines are easier to spot nowadays since most wine stores store them in a clearly labeled section. However, if your local winery does not, then VegNews has got you covered.

Serving something harder? Fortunately, every brand of hard liquor is vegan—except cream-based liqueurs, of course. However, only potato-based vodka, rum and tequila are completely gluten-free. Whiskey and bourbon, on the other hand, are up for debate since the grains may not be fully removed during the distillation process.

And while we are on the topic of grains, wheat and flour as a thickener, bread staple and dessert creator are also hard to avoid in many dishes. So don’t. Just substitute the white stuff for either a coconut or almond flour. Both not only add more nutritional value, but will make the carb-conscious and plant lovers happier eaters on Turkey Day.

Trust me—gravy thickened with coconut flour will still be creamier than ever, and people will still go nuts over a pecan pie with an almond flour crust.

Speaking of creamy, eliminating dairy can get scary for the mac and cheese lovers out there. So, if you aren’t a lover of lactose, try bringing a vegan creation of this Thanksgiving staple to the dinner table. Plus, since many restricted dieters are accused of being preachy or judgmental, this is a more peaceful way of shoving your dietary beliefs down your family and friends’ throats.

The vegan mac and cheese recipe by Vegan Yumminess is a total crowd pleaser, and Sweet Potato Soul’s two-for-one option is a winner, too, since it includes a top layer of Brussels sprouts.

The Feat of the Meatless ‘Meat’

And last, but not least, while some nonmeat eaters love Tofurky on Thanksgiving Day, others may prefer to skip the faux meat options. However, I found an option that will please all of the above—a Thanksgiving Meatless Loaf.

You will already have a majority of the ingredients, such as sweet potatoes and onions, on hand from your other recipes, and since it only takes 20 minutes to prep, you can throw this meatless main dish in the oven next to the turkey. Another win—they both go well with gravy.