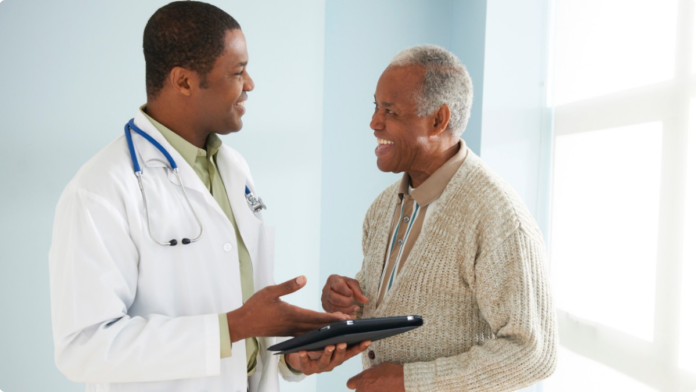 The liver can regenerate. A lost arm or leg can be replaced with a man-made prosthetic. But the heart cannot be so easily fixed. Heart cells do not regenerate or repair themselves. And while artificial hearts do exist, they can only be used for a short period. Because the heart cannot be easily repaired or replaced, heart failure is a serious issue. African-Americans are more likely to experience heart failure and more likely to die from it.

Heart failure does not mean that the heart has stopped beating. Rather, it means that the heart is not working properly. It beats but does not efficiently distribute blood throughout the body.

There are several different types of heart failure, generally characterized by which side of the heart is affected (left or right) and whether the issue concerns the heart’s ability to pump out blood or its capacity to take in blood from the body. If the heart is compromised for too long, fluid will build up around it.  This stage is called congestive heart failure and requires immediate medical attention.

During heart failure, the body compensates for the heart’s weaknesses in several ways. The heart may stretch to enable it to contract more vigorously. After being repeatedly stretched, the heart becomes enlarged. In addition, after pumping harder for longer periods, the heart’s cells become larger, eventually causing the heart muscle to become more rigid. The heart will also pump faster to counteract the fact that less blood is being pumped. Amazingly, the heart will also try its best to conserve what little blood is being pumped by prioritizing key parts of the body (the brain) while diverting needed blood from “less essential” body parts (the kidneys).

Symptoms of heart failure include shortness of breath, fatigue, coughing or wheezing after physical activity, swelling in the lower body, rapid heart rate, fluid weight gain, or confusion. While any one of these signs alone might not be cause for concern, the American Heart Association says anyone who experiences more than one of these symptoms should seek medical attention.

Heart failure is deadly. It cannot be cured, it can only be managed. The Centers for Disease Control and Prevention reports that half of those diagnosed will die within five years of the diagnosis. Only ten percent will survive longer than ten years.

For most people, heart failure is an avoidable condition. Sometimes, heart failure develops from causes beyond the individual’s control. A person may be born with a heart defect or the heart may be weakened by a virus. However, these causes are rare. According to the American Heart Association, “The most common conditions that can lead to heart failure are coronary artery disease, high blood pressure and previous heart attack.” These conditions make the heart work harder and therefore more likely to fail.

Beyond these, The Mayo Clinic notes that there are risk factors that increase the probability of heart failure by making one of the above conditions more likely to occur. The risk factors include diabetes, certain diabetes medications, sleep apnea, obesity, and arrhythmia (irregular heartbeat). The CDC states thatsmoking, failure to exercise regularly, and eating a diet with too much fat, cholesterol, or sodium also increase one’s risk of heart failure.

Heart failure is as common as it serious. According to the CDC, nearly six million Americans currently live with heart failure. Other sources indicate that as many as 960,000 new cases are diagnosed each year.

Why are African-Americans so predisposed to heart disease? American Heart Association research led by Dr. Mercedes Carnethon found that “The incidence, prevalence, and prognosis of heart failure are less favorable among African-Americans and are largely attributable to the higher burden of traditional risk factors among African Americans.”

Studies consistently find that African-Americans experience nearly every major risk factor for heart failure at alarming rates. According to data gathered jointly by the American Heart Association and American Stroke Association, while 34.5 percent and 32.3 percent of white men and women, respectively, have hypertension, 45 percent of Black men and 46.3 percent of Black women have hypertension. Hypertension makes the heart work harder, increasing the exposure to and prevalence of heart failure in the African-American community.

The influence of these risk factors is so strong that researchers at Johns Hopkinsfound that once hypertension and diabetes are removed, the racial disparities in heart disease between whites and African-Americans nearly disappear.

Beyond medical factors, African-Americans’ lifestyle choices may increase their risk. Although exercise reduces the risk of heart diseases, the American Heart Association found that among youth of all races, Black girls and Black boys were most likely to be inactive. Similarly, it found that Black adults were the least active.

Diet is also a factor. While the optimum diet for heart health is low in fat, sodium, and cholesterol, a traditional African-American soul food diet is none of the above.  Described by one researcher as a diet with “high consumption of vegetables with high starch content (e.g., beans, corn, and potatoes), fried meats, poultry, and fish, margarine and butter for cooking, and whole milk and buttermilk for cornbread and rolls,” the traditional diet is not heart healthy.

When African-Americans’ greater propensity for hypertension, diabetes, and heart diseases is combined with unhealthy diet and low levels of exercise, the impact on heart health is nearly impossible to overcome.

While African-Americans are at higher risk for heart failure, there is some good news. First, heart failure can be avoided with simple lifestyle changes such as eating healthier, eating less, and moving more. Because many of the risk factors for heart failure and other heart diseases – such as hypertension, diabetes, and obesity — are directly linked to diet and exercise, changing these lifestyle factors can make a huge difference in heart health outcomes.

Although the traditional African-American diet is unhealthy, patterns can be changed. A study of overweight Black women found that when exposed to a church-based nutrition program, program participants lost an average of ten pounds; those that did not gain weight. Other studies have found similar success for programs designed to increase Black women’s physical activity. If poor diet and lack of exercise are eliminated, African-Americans might have a fair shot at avoiding heart failure.

Although heart failure cannot be cured, it can be managed with medication. Even the best medication must be taken as directed. However, studies indicate that African-Americans are less likely to take their medications consistently. Some of this reluctance is attributable to attempts to focus on diet and exercise; some is attributable to temporarily feeling better or a preference for home remedies.  Medication cannot be effective if it is not taken.

There is yet another barrier to overcome: racism. Racism in health care is not a new topic. While some studies have found that African-Americans are less likely to attend follow-up appointments, racism may be part of the reason. Doctors, like other members of American society, may harbor implicit racial bias that causes them to view their Black patients differently on a subconscious level. With a disease as serious as heart failure, this bias is literally a matter of life and death.

Several studies have examined bias in health care. A recent study by Dr. Khadijah Breathett and her colleagues at the University of Arizona College of Medicineexamined outcomes for patients with heart failure who had been admitted to a hospital’s intensive care unit. The doctors reviewed the records of over 100,000 patients at nearly 500 U.S. hospitals. Disturbingly, they found that while the medical community has long known that having a cardiologist take the lead role in the care of heart patients increases the patient’s odds of survival, Black patients were 40 percent less likely to be assigned a cardiologist as their primary medical caregiver.

Other studies have found that African-Americans are less likely to be given the best or latest treatment for heart conditions. According to Dr. Michelle van Ryn, implicit racial bias causes African-Americans to receive worse treatment for several diseases and conditions, including hypertension, sleep disorders, coronary artery disease, and cancer.  A 2007 study found that doctors with a strong implicit bias towards whites were more likely to use thrombolysis to treat coronary disease in white patients but less likely to use the method with Black patients.

African-American heart failure patients are fighting an uphill battle long before they are diagnosed. Risk factors like diabetes, hypertension, and coronary heart disease make the battle difficult, but making lifestyle choices that improve diet and exercise can make the battle winnable. Although no one heart patient can be expected to combat the racism in medicine, Black patients should be acutely aware of its presence and make sure to advocate for themselves or bring someone along who can do so. If these steps are followed, Black heart patients can achieve better health outcomes.