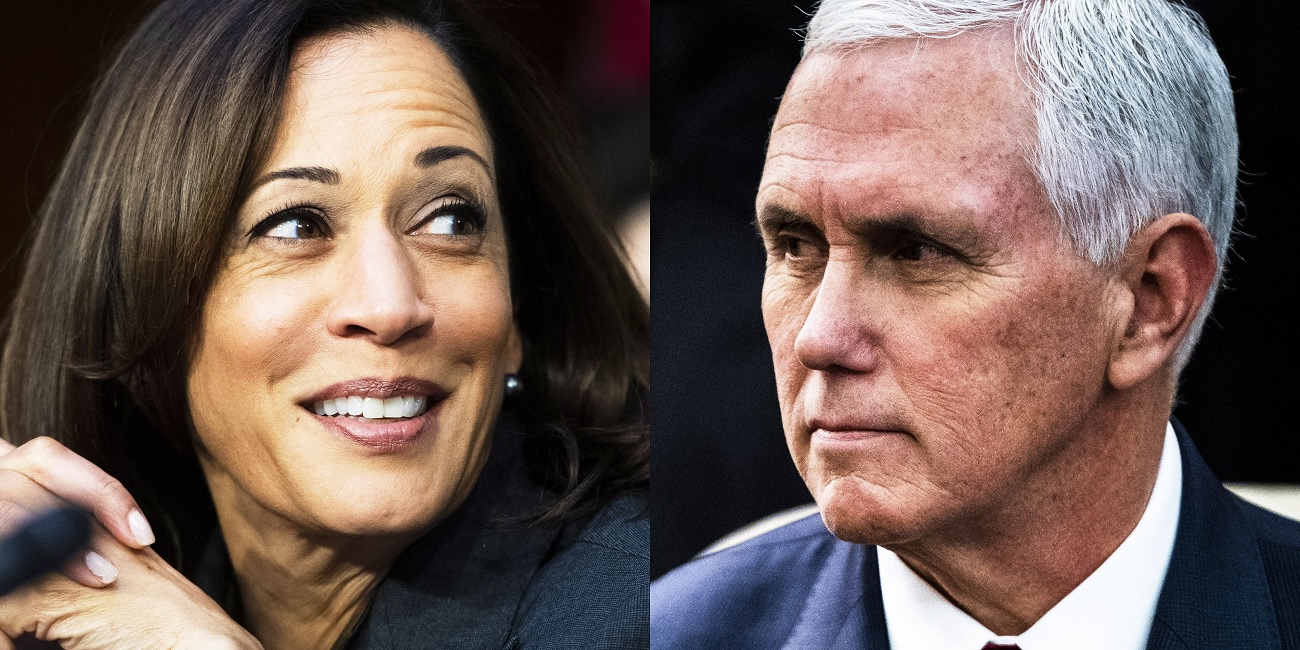 The senator has the chance to pitch to her biggest audience yet on Wednesday, when she debates Vice President Mike Pence

Standing before Sen. Kamala Harris at a campaign event near a Raleigh barbershop, Marcus Bass asked the Democratic vice presidential nominee a pointed question: How would she and Joe Biden convince young Black voters their ticket isn’t simply the lesser of two evils?

“I appreciate your question and the point,” Harris replied. “Nobody is supposed to vote for us — we need to earn it.”

That’s what Harris, the first Black woman to appear on a major party’s presidential ticket, is trying to do in swing states like North Carolina, as the presidential contest enters its final weeks. In conversations at barbershops and historically Black colleges and universities, through ads on popular websites and live Instagram interviews, Harris is pitching herself and Biden as a team that can make meaningful progress on issues that matter to Black Americans, like police reform, ending the new coronavirus pandemic and creating a more equitable economy.

She’ll have the chance to pitch to her biggest audience yet on Wednesday, when she is expected to debate Vice President Mike Pence. Harris is likely to deliver a message that’s particularly resonant for Black Americans, including the disproportionate toll the coronavirus has taken on their communities and the vital need for access to health care.

The theme takes on a new significance after President Donald Trump was hospitalized with the virus, reviving criticism of the administration’s handling of the pandemic.

The intensifying focus on the vice presidential debate offers Harris an important chance to address doubts about the Democratic ticket.

Biden’s history-making selection of Harris as his running mate has energized and excited many Black voters, particularly women, who are among the Democratic Party’s most reliable voters. Harris attended Howard University, an HBCU, and was a member of the Alpha Kappa Alpha sorority. Members donning the sorority’s green and pink colors can often be spotted outside her events.

But she’s still facing skepticism about her past as a prosecutor, and some young Black voters say they’re looking for something more than a politician who looks like them. They’re not yet convinced Biden and Harris are committed or able to execute meaningful change.

“I do think they have a lot more work to do,” said John Ray, a 32-year-old Black man who works with youth in Detroit. “We know that grandparents and certain age demographics are already going to vote. So, should a lot of energy be spent there, or should we be trying to really activate those populations that historically don’t vote? Some are saying, ‘What are you going to do beyond campaign promises to actually make things better for me in my community?’”

Harris has appealed to Black voters during recent visits to Michigan and North Carolina, including those who couldn’t or didn’t vote in 2016 and those whom Trump is courting, particularly Black men. Despite Trump’s efforts, Black voters nationally support Biden by a wide margin, polling shows. She’s also campaigned in Milwaukee and Philadelphia, two cities with large Black populations in swing states. 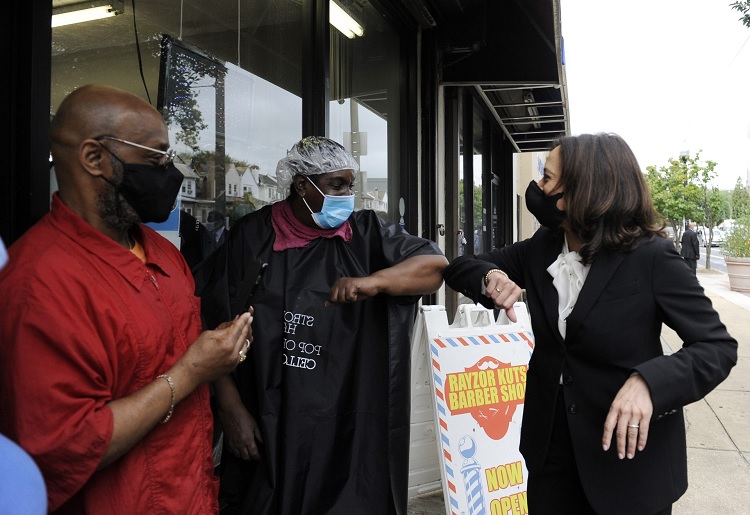 Her message in Detroit, the nation’s largest Black city, was clear: I see you.

“There’s so much that is about Detroit, as not only a measure of our country and its excellence but also as a matter of the challenges that we face as a nation,” Harris said, recognizing the unique challenges facing the city, which was devastated by COVID-19 and the economic fallout.

She chose Shaw University, an HBCU in Raleigh with a history in the civil rights movement, as the site of her first North Carolina visit, where she delivered a speech on the Supreme Court.

Biance Wilburn, a senior at Shaw University, learned through her work with an advocacy group last year that many of her peers thought voting didn’t matter, a perception that she’s worked to change. Wilburn, who is 21, called Harris’ visit to campus a “wow” moment before the California senator greeted students and grooved to a drumline performance.

“It means a lot to be a Black woman and just Black in America, period,” she said.

But Tory Jackson, a 36-year-old mental health worker from Raleigh who is Black, said many of his friends are resigned to another Trump win and may opt out of voting. He likened it to staying in a bad relationship instead of gambling on a new one.

“We’ve dealt with him for four years. We’ve already seen what he can and can’t do. We already know his antics,” said Jackson, who plans to vote but not for Trump.

Nicole Small, of Detroit, said early momentum from Harris’ selection has fizzled out.

“Now, some of those who were really excited, they’re now gravely concerned. Some are traditional Democrats who are saying, ‘We see no visibility in our community.’ You really need to get out here, and you need to show that you understand that you have a fight on your hands. They act as if they have it made,” said Small, a Detroit Charter Commission member.

Harris can rattle off with ease a lengthy list of policies aimed at improving the lives of Black Americans; one of her challenges is making sure those policies break through. They include investing $70 billion in HBCUs and working to reduce racial gaps in home and business ownership through tax credits for first-time home buyers and ensuring access to capital for Black small-business owners.

On health care, Harris draws a direct connection between the pandemic and health care access for Black people, who are dying at disproportionate rates from the virus. The Supreme Court, meanwhile, is set to hear a case just after the Nov. 3 election that could overturn the Affordable Care Act, which protects access to insurance for people with preexisting conditions.

“The perspective that Joe and I share is to, one, acknowledge these racial disparities, and then address them,” she said. “By the way, Donald Trump has no plan.”

Police reform, meanwhile, is heavy on the minds of many voters after a summer of several police shootings or killings of Black people. It’s an issue Harris is well versed in as a former prosecutor, and she talks about it with more fluency and nuance than Biden, who largely glossed over the reform proposals in his first debate. Their proposals include a national registry for police misconduct and a national use-of-force standard that’s stricter than what most states use, as well as banning tactics like chokeholds and no-knock warrants.

It was those policies that Harris turned to in response to Bass’ lesser-of-two-evils question. The community organizer said that he appreciated her detailed answer but that Democrats, including Harris, have more work to do to energize Black voters.

“When I hear young people saying they’re not going to vote, I don’t think that is a static message,” he said. “I think that’s a challenge.”

How to watch the debate 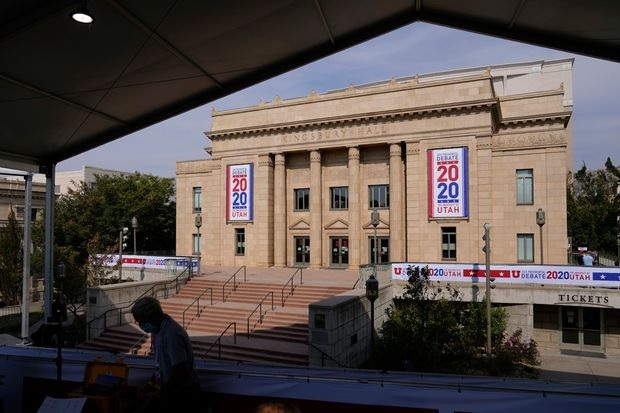 The debate will air at 9 EDT/6 PDT, and like the presidential debates, is scheduled for 90 minutes with no commercial breaks.

The debate also will be aired on most major networks and cable news channels, including Fox News, CNN, ABC, CBS, NBC, MSNBC, PBS and C-SPAN.

Viewers also can catch the debate live on YouTube from various outlets, listen or watch on NPR, or watch live with Hulu, Fubo, Sling, or some other streaming services.

The debate will be moderated by Susan Page, USA TODAY’s Washington Bureau chief.