DefenderNetwork.com
Home NEWS Local & State Bloomberg on why Blacks should vote for him 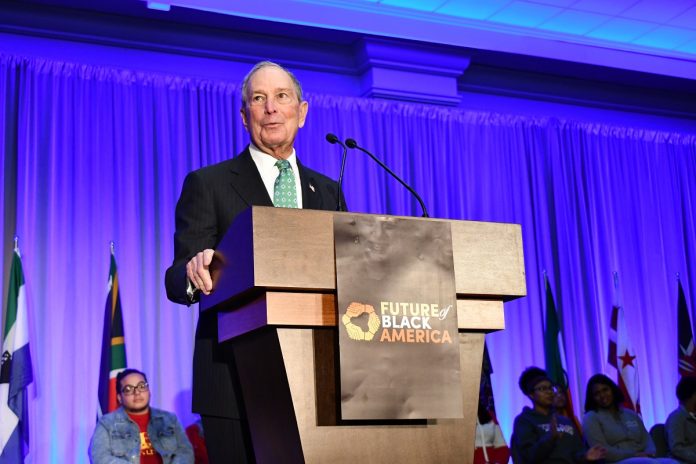 During his remarks, Bloomberg, who until a few months ago was unaware of the 1921 destruction of Black Wall Street, said he vowed that whenever he announced his plans for Black economic advancement it would be in Greenwood, the Tulsa area that was home to Black Wall Street.

His ‘Greenwood Initiative,’ according to www.mikebloomberg.com, seeks to “help create generational wealth for Black Americans, drive economic empowerment and close the economic gap between white and Black Americans.”

The three pillars of this initiative are 1) creating one million new Black homeowners; 2) creating 100,000 new Black businesses, nearly doubling the current number; and 3) committing $70 billion in funding and technical support “to turn around 100 of the country’s most disadvantaged communities.”

After his symposium remarks, Bloomberg, a late entry into the field of Democrats seeking to unseat President Donald Trump, spoke briefly with the Defender about his campaign’s ‘Black Agenda’ and why Blacks should give him their votes.

Your ‘Greenwood Initiative’ is online; some will read it, some won’t. What’s your elevator pitch to Black constituents on why we need to vote for you?

Bloomberg: “There’s been discrimination for a few hundred years. It’s time to stop. And the ways to stop it is to, number one, improve education, and number two, lead from the middle… and come in and say, we’re just not going to tolerate that kind of behavior. You know, you don’t say there are nice people on both sides of the issue. You go out there and you say, we’ve just got to get along. I’m the President of the United States and this is what we’re going to do.”

Is your ‘Black Agenda’ summed up by your ‘Greenwood Initiative’ or is there more to it?

Bloomberg: “No, I think there are plenty of other issues. If you’re running for office, you have to have a few things that people can understand and can remember…You’re not going to get 20 things in. Look, increasing the number of homeowners, increasing the number of jobs; those are the kind of things that you have to do. And improving public education. I mean, these things, we all know what to do. The question is, how do you get them done. And most people promise and then they don’t deliver. Why? Because they’re not managers and they don’t know how to do it and they don’t want to get involved. They want to be able to have a press conference and say, ‘Oh, I’m going to take care of you. I’m going to put a chicken in every pot,’ or whatever the case may be.”

With Congress being so contentious and divided, how do you plan on, when you become President, initiating this agenda?

Bloomberg: “You know, I have two kids. When they have a fight with each other, you’d think you can’t do it. Of course, you bring them in, and you sit them down. I think you can do it. Nobody says it’s easy, but you need somebody whose basic instinct is to pull people together, not to divide them. And if I want you to come along, walking up and hitting you with a 2-by-4 upside the head and asking for a favor is not a way to get you to do something. It’s coming up and kissing and then asking, and sometimes it works, sometimes it doesn’t. But that’s what management is all about.

In my company, in my foundation, in New York City for 12 years you have people that don’t get along. Okay; they don’t get along. But you can make it easier for them. Everybody wants recognition and respect. And if you give people recognition and respect, okay, I can’t stand the SOB, but he was nice to me. You call up and you say…first thing I would do, I’d call every congressman and every senator and just say, “I just wanted to introduce myself. My name’s Mike Bloomberg, I’m your new president, and I will reach out or my staff reach out to you, and if we can get together, that’s great, and if we can’t, at least we can be civil and understand each other. Because there’s going to be some time when we’re on the same side of a given issue, and it helps you and helps me to be there.”