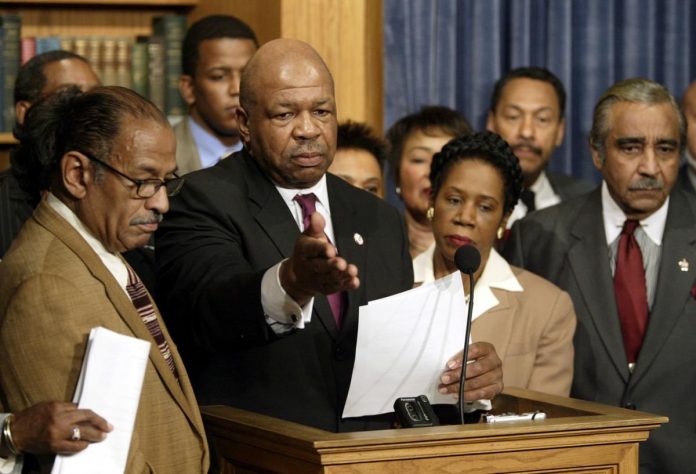 Elijah Cummings, the Congressman from Maryland, died Thursday and he is being mourned all over the country. He was 68 years old.

There was a steady outpouring of condolences coming from all corners of the country, including many of his fellow Black leaders. That included California Sen. Maxine Waters, who called Cummings “a dear colleague and friend” in a statement she emailed the media on Thursday.

“While there are so many fond memories that I have of Chairman Cummings, what I loved and admired most about him was his dignified and courageous leadership, and his fierce and unflinching advocacy for justice, civil rights, and equality,” Waters said in part. “He loved his family, his community, and this nation deeply, and fought with ‘every breath in his body’ to protect them — no matter the cost.”

NAACP President Derrick Johnson also took the time to recognize Cummings as “a statesman devoted to Baltimore and the civil rights movement” who “consistently brought attention to the plight of African-Americans and oppressed populations throughout his 23-year service in the U.S. House of Representatives.”

The unexpected announcement came after Cummings, the ranking chairman of the House Oversight and Reform Committee, recently announced that he was having a medical procedure but never returned to his Capitol Hill offices afterward, according to the Baltimore Sun. That announcement came on Sept. 30 and said that he was only expected to miss about two weeks of work.

Tuesday would have been his first day back to work following his medical procedure. Instead, he ended up missing that day’s House roll call vote.

Prior to the medical procedure, Cummings has been embroiled in a feud with President Donald Trump, who the target of a Democratic-led impeachment inquiry championed by the Maryland Congressman. Trump had been attacking Cummings with dog-whistling insults. Back in July, the president called Baltimore, a predominately Black city that Cummings represents and has called home since birth, “a disgusting, rat and rodent infested mess” and disparaging the Congressman in a tweet that many people called racist.

According to his official House bio, Cummings “began his career of public service in the Maryland House of Delegates, where he served for 14 years and became the first African American in Maryland history to be named Speaker Pro Tem. Since 1996, Congressman Cummings has proudly represented Maryland’s 7th Congressional District in the U.S. House of Representatives.”

Cummings is survived by his wife, Maya Rockeymoore Cummings, and their three children.

Cummings had been hospitalized last year after he was admitted to Johns Hopkins Hospital for a bacterial infection in his knee, which the congressman’s office described at the time as a minor procedure. That hospitalization prompted his wife to suspend her Democratic primary campaign for Maryland governor in January of 2018. Prior to that, Cummings was hospitalized in May of 2017 after undergoing “minimally invasive” heart surgery. It was a procedure to correct a narrowing of the aortic valve. It was unclear if his death early Thursday morning was related to either of those procedures.

At the time, rumors swirled in Baltimore that Cummings was planning to retire.

Those rumors turned out to be unfounded and Cummings returned stronger than ever to lead the charge into what has now become an impeachment inquiry that moved his House colleagues closer to holding a vote to impeach Trump.

Today our country lost a true leader. Congressman Elijah Cummings was a friend, a passionate fighter for justice, and a powerful voice of moral conscience in our government who served his country for decades with dignity and integrity. I’m blessed to have known him. #RIPElijah

We lost a giant today. Congressman Elijah Cummings was a fearless leader, a protector of democracy, and a fighter for the people of Maryland. Our world is dimmer without him in it.

Saddened to hear of the passing of a great statesman that I truly admired, US Rep. Elijah Cummings of Maryland. May he rest in power. pic.twitter.com/FhmuPO7WWw

.@RepCummings: Shocked by the suddenness of his passing. He possessed broad shoulders, keen intellect, a tough mind&a tender heart; the attributes of which great leaders are built.Condolences to his wife,his family, Baltimore,his constituents & the nation. A fine public servant. pic.twitter.com/RLemnnwTXh

What a devastating loss for the country. We were blessed to be guided by his moral compass and his relentless commitment to bend the arch of the universe just a little more toward justice. Rest in Power, @RepCummings 🙏🏾. pic.twitter.com/xRZohqYEWp