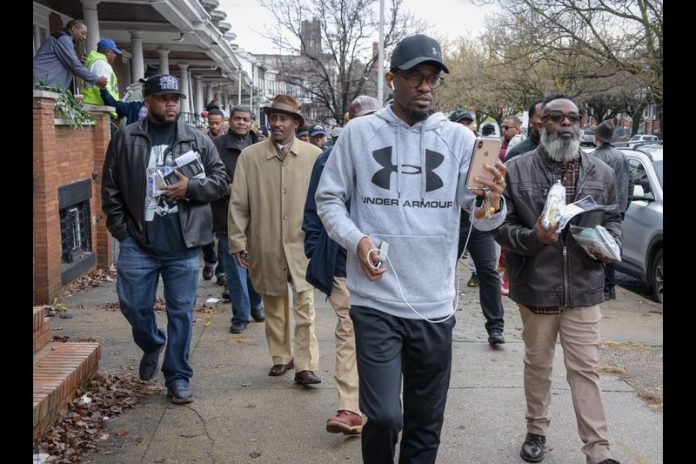 A group of Black men from Baltimore is on a mission to address the violence that plagues some of the neighborhoods throughout the city. Local community leaders have joined forces to host walks that were started to spread awareness about violence and provide support for residents who have felt the wrath of its negative effects.

In a grass-roots movement to break the cycle of violence, African American men stage walks through city neighborhoods https://t.co/QPKy5ayen5

The group—a collective comprised of activists, church leaders, and residents—has been gathering for months to walk the streets of Baltimore and interact with locals. To offer solutions to issues faced by the community, they provide resources for employment, drug treatment, and other forms of support along their walks. Baltimore ended 2019 with one of its worst homicide rates to date, and the men are determined to prevent another individual from becoming a statistic. They want to mediate situations in the streets that could potentially result in violence.

“We have to be at the center of the change of saving lives,” said Dr. Andrey Bundley who serves as the Director of African American Male Engagement, a division of the Mayor’s Office of Children and Family Success. “If the state of Black men is going to change, it’s going to take Black men to inspire and guide Black men, first, and then other people of good will.”

Although they launched the grassroots initiative months ago, the men are making a significant impact. Nearly 100 people have been able to secure jobs through the resources they’ve provided. They hope to gather 1,000 men to take to the streets during Baltimore’s annual Dr. Martin Luther King Jr. parade which is slated to take place on January 20. The collective—which currently includes about 60 men—has set a goal to reach 10,000 organizers in the future.

There have been several initiatives created to combat gun violence in inner-city communities. Washington, D.C.-based teen entrepreneur RuQuan Brown launched an apparel brand dubbed Love1 that donates 20 percent of its proceeds to organizations supporting communities that have been ravaged by violence.