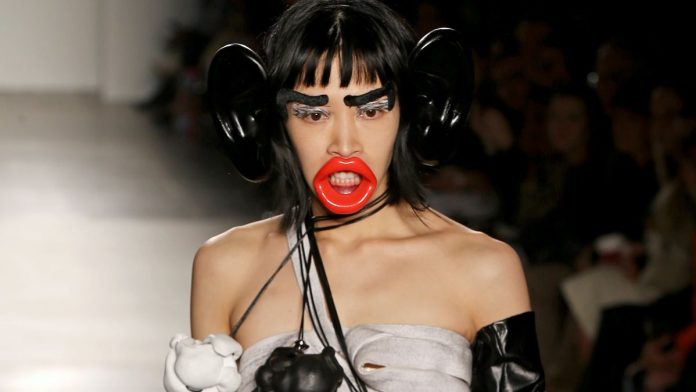 A Black model, Amy Lefevre, vehemently refused to wear a costume of huge monkey-like ears and enormous red lips on the catwalk at New York’s Fashion Week and stormed out of the event as soon as she left the runway.

Lefevre said that when she told organizers how insulting their request was, “I was told that it was fine to feel uncomfortable for only 45 seconds.”

“I was literally shaking. I could not control my emotions. My whole body was shaking. I have never felt like that in my life,” Lefevre added, according to the New York Post. “People of color are struggling too much in 2020 for the promoters not to have vetted and cleared accessories for the shows.”

The 25-year-old Lefevre has modeled for four years and has been on more than two dozen catwalks, the Post said … yet the creator of the stereotypical accessories, the institute sponsoring the event, the organizers and promoters and even the other models were seemingly lined up against her in this case.

The Post ran photos of two other models, neither of whom were African-American, who walked with the ears, lips and exaggerated eyebrows Lefevre refused to put on. The creator, Junkai Huang, a native of China and a student at the Fashion Institute of Technology, may not have fully understood the racial overtones of the finished product, which was to have highlighted “ugly features of the body,” according to a witness.

Lefevre told show producer Richard Thornn of her objection, as did other models, according to an unnamed witness. “He screamed in my face, ‘You need to back down and get away,’” the witness told the paper. “It was such a grave lack of judgment.”

The event celebrated the 75th anniversary of FIT, a fixture in New York fashion education, and featured alumni of its Master of Fine Arts class in Fashion Design.

“However provocative design and fashion might be though, my commitment to ensure that people are not made to feel uncomfortable, offended, or intimidated is also of the utmost importance not only to me personally but to the college community as well,” FIT president Dr. Joyce F. Brown told the Post. Brown said the institute would investigate the incident.