DefenderNetwork.com
Home NEWS National Black unemployment rises after Trump brags how low it is at State... 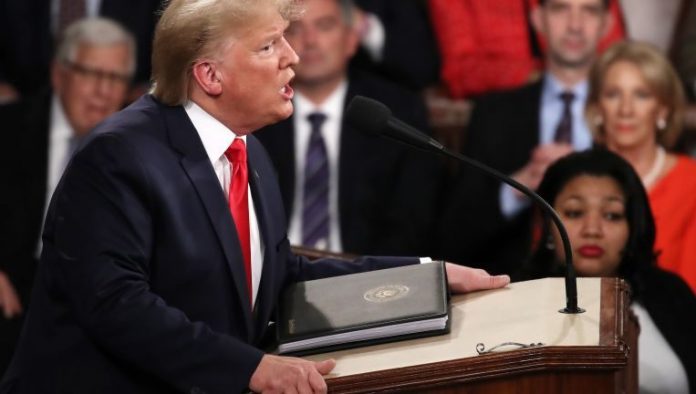 While defenders of the president were probably busy spinning the jobs report for January, Black workers likely exhaled a deep sigh, but not one of relief, according to News One. The numbers were there for all to see: Black unemployment had risen yet again for at least the third straight month, according to the latest monthly jobs report that was released Friday morning — at the start of Black History Month, no less.

Those figures stood in stark contrast to the bragging and boasting President Donald Trump was doing just a few days ago at his State of the Union address when he resorted to his familiar refrain about how low the Black unemployment rate is.

According to Bureau of Labor Statistics, Black unemployment rose from 5.9 percent to 6 percent from December to January. And while on the surface that may seem like an inconsequential and minuscule difference, there are two other things to take into account.

For one, that 5.9 unemployment rate is still nearly twice that of white people (3.1 percent) and well above the national average of 3.6 percent, the latter of which also rose from December. Secondly — and arguably more importantly — Black unemployment has been steadily rising for at least the past three months, going from 5.5 percent in October to 6 percent as of last month.

The trend in the wrong direction undermines Trump’s persistent claims otherwise and suggests — like all those Black folks he had as his guests at the State of the Union address — that he’s just posturing to disingenuously demonstrate what he says is a commitment to Black America.

Economists have bristled at recent job reports that have fallen well short of expectations. While there were a respectable 225,000 jobs added to payrolls in December, there hasn’t been enough of an emphasis placed on exactly what type of jobs are actually hiring. Many of them have been low wage gigs in a continuation from a trend seen following other recent jobs reports. In fact, the recent proliferation of low-wage jobs has left a bleak outlook when it comes to the country’s overall employment situation, as December’s jobs report showed the “weakest wage growth since July 2018,” according to Washington Post economics correspondent Heather Long.

The Economic Policy Institute (EPI) has given a somber reality check to those celebrating the low levels of unemployment.

“Nominal wages rose 3.1% year-over-year in November, which is slower than expected in an economy that has had historically low unemployment,” EPI wrote in part before continuing later. “It is important to remember that periods of stronger wage growth for production/nonsupervisory workers in this recovery tend to be followed by periods of relatively weaker growth. Definitely a promising sign if the stronger trends continue, but the slowdown for all private sector workers is still troubling.”

The Brookings Institute also previously released its analysis of the American economy and found that even “as the U.S. economy hums along at a favorable pace, there is a vast segment of workers today earning wages low enough to leave their livelihood and families extremely vulnerable.” Brookings went on to write that “53 million Americans between the ages of 18 to 64—accounting for 44% of all workers—qualify as ‘low-wage.’ Their median hourly wages are $10.22, and median annual earnings are about $18,000.”

And the recession fears that Trump tweeted about eight years ago were very real after the December jobs report. Another recession would disproportionately affect Black workers in particular.