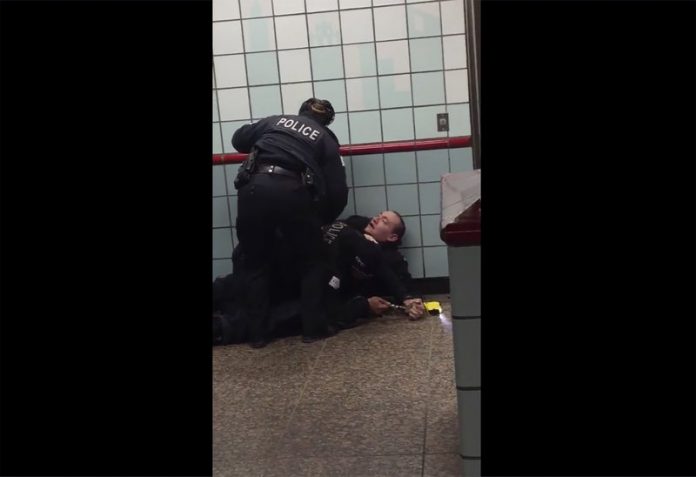 Chicago’s mayor said video footage of police shooting and wounding a suspect inside a downtown Chicago train station is “extremely disturbing” and that she supports the interim police superintendent’s request for prosecutors to be sent directly to the scene — an unusual or perhaps unprecedented action in the nation’s third largest city.

After watching what she called the “widely shared footage” of the Friday afternoon shooting inside the Red Line L station, Mayor Lori Lightfoot tweeted that although “one perspective does not depict the entirety of the incident, the video is extremely disturbing and the actions by these officers are deeply concerning.”

“To ensure full transparency and accountability, I support Superintendent (Charlie) Beck’s decision to contact the State’s Attorney due to the potential criminal nature of this incident,” she tweeted.

Deputy Superintendent Barbara West told reporters on Friday that the police department was conducting concurrent criminal and administrative investigations into the shooting.

Police spokesman Anthony Guglielmi told The Associated Press on Saturday that although Beck “doesn’t want to rush to judgment,” the cellphone footage that has been widely shared on social media and footage from Chicago Transit Authority cameras raises “significant tactical concerns” about the actions of the two officers who were involved. He said that he doesn’t know of any superintendent calling prosecutors to the scene as Beck did.

The shooting happened shortly after 4 p.m. Officers who were dispatched to the scene after receiving a call that another officer needed assistance spotted a man jumping from one car to another, which violates a city ordinance. Officers chased and ultimately grabbed the man.

I don’t exactly know what to do with this, but I witnessed and recorded the police-involved shooting at the Grand Red Line station in Chicago a little over an hour ago. This is my unedited video. (Trigger warning, obviously.) pic.twitter.com/tIrv1RfTN3

The video shows a male officer lying on top of the suspect at the base of an escalator and struggling to keep the man still. The man can be heard saying, “I didn’t do nothing to you,” as the officer on top of him says, “Stop resisting,” a number of times. As they stand up, a female officer appears to try to pepper spray the man’s face before telling the man to show his hands, presumably to allow the other officer to handcuff him.

The man refuses to be handcuffed and as he he stands, stun guns that the officers apparently used on the man can be seen on the floor. With the man still struggling to get away, the female officer shouted, “Give him your hands,” and a gunshot rang out. As the man fled up the escalator with the officers in pursuit, a second shot was fired out of view of the camera, though it’s unclear which officer fired the shots.

West told reporters that only one of the officers shot the man, striking him twice.

Police have not released the name of the man. Guglielmi said that as far as he knew, the man was still hospitalized in critical but stable condition.

Attorney Gloria Schmidt Rodriguez, who said she has been retained by the man’s family, said the man underwent surgery after he was shot in the abdomen and buttocks, and that he will likely need more operations.

Schmidt Rodriguez, who also represents two brothers involved in the case of actor Jussie Smollett, said the family hired her, in part, because they anticipate the 33-year-old man might be charged with a crime and they are not getting any information from authorities. She did not reveal his name.

“They’re kind of scared about what’s going down, and they’re not getting any information whatsoever,” Schmidt Rodriguez said.

Guglielmi said investigators were examining station surveillance video and witnesses’ cellphone footage. Neither of the officers involved were wearing body cameras, which have been issued to patrol officers but not yet to officers in the police department’s mass transit unit.

“They will be getting them soon but every inch of the CTA is covered by surveillance cameras,” so the department’s priority was to get body cameras for all the patrol officers first, he said.

The Civilian Office of Police Accountability will investigate the shooting, as it does all officer-involved shootings. The officers were placed on administrative duty pending the outcome of the investigations, which is also routine.

Also, the Cook County State’s Attorney’s office issued a statement saying it was working with the FBI to investigate the shooting.

The shooting came on the same day that the department and the mayor announced that in response to a spike in crime on the city’s rail system, dozens more officers would be assigned to CTA trains and platforms, a team of detectives would investigate nothing but CTA crimes and a Strategic Decision Support Center would be opened so that police can monitor the system’s 32,000 cameras.

Beck’s decision to immediately involve prosecutors comes amid police department efforts to win the public’s trust following a series of police misconduct cases that have cost the city hundreds of millions of dollars in payouts. Perhaps the most notorious scandal was the 2014 killing of a black teenager, Laquan McDonald, who was shot 16 times by a police officer who was later convicted of murder. McDonald’s death and the city’s efforts to keep the public from seeing dashcam video of it sparked outrage that led to protests and the firing of the city’s top cop.