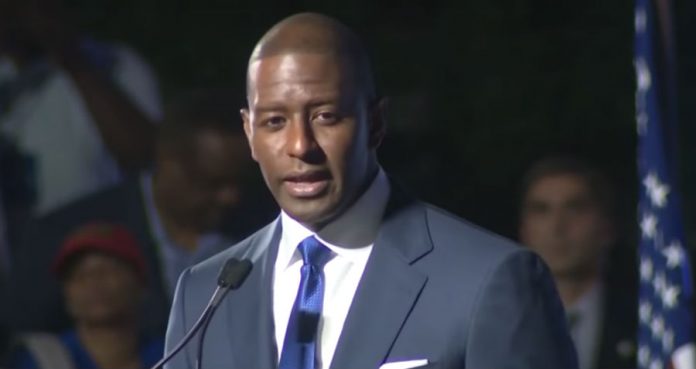 Police in Florida said an investigation has begun over leaked photos and an official report associated with a suspected drug incident in a hotel involving Andrew Gillum were published online. The explicit photos were leaked on social media late Friday night and showed a man who resembles the former Tallahassee mayor in a compromising position purportedly in a swank Miami Beach hotel on March 13. British tabloid the Daily Mail also published photos it said were from inside the hotel room that claimed to show prescription drugs in addition to a powdery white substance that was allegedly crystal meth.

In addition, in the hours after the news first broke on the morning of March 13, Candace Owens — the conservative Black pundit who has openly mocked the “mass hysteria” over the coronavirus and once spoke of Adolf Hitler in sympathetic terms — posted a copy of the police report to her social media accounts.

The Miami Beach Police Department (MBPD) told the Tallahassee Democrat in an article published Sunday afternoon that it was “unknown how the report was shared” and confirmed that how Owens got it was “being looked at.” The department spokesperson also doubted the Daily Mail got the photos it published through a Freedom of information Act request, as it reported.

“I am the sole spokesperson for the MBPD,” Ernesto Rodriguez wrote to the Democrat in an email. “I can assure you no PRRs have been fulfilled besides the incident report,” he added while using the abbreviation law enforcement uses for the terms “Photo Request Response” and/or “Public Records Request.” Rodriguez said he would fulfill those requests by everyone who made them “at the same time” once “they are complete.”

Owens’ involvement along with other aspects of Gillum’s hotel incident sparked suspicions of some type of political setup. While that was not confirmed, Owens’ likely anti-Black Democrat agenda was on display for all to see when she tweeted a photo of Travis Dyson, one of two other men in the hotel from with Gillum. Owens claimed Dyson is “an openly gay man” with whom Gillum was having “a drug/sex party.” That tweet came more than two hours after Owens tweeted a copy of the police report.

It was unclear what kind of penalty, if any, Owens could face for posting a copy of the report that police suggested may have been obtained illicitly.

After the news broke, Gillum, a 40-year-old married father of three, released a brief statement apologizing. He said he was in Miami “for a wedding celebration when first responders were called to assist one of my friends.” Dyson, who was treated for a drug overdose, was later contacted by a reporter and denied knowing anything about a wedding. Dyson said he and Gillum have “been friends for a while” and that he “personally was not celebrating a wedding.”

Initial reports indicated methamphetamines were involved, prompting Gillum to first deny he’s ever used the drug before he voluntarily entered rehab on Monday for what he described as “alcohol abuse” and “depression” that he said followed his campaign to be governor. The admission was entirely out of character for a rising star within the Democratic Party who up until the incident had consistently presented himself as the consummate family man.

The police report claimed that the Miami Beach Police Department was called to the Mondrian Hotel at 1100 West Avenue just before 1 a.m. March 13 pertaining to a suspected drug overdose. Gillum, Dyson and a third man, Aldo Mejias, were inside of the hotel room when the Miami Beach Fire-Rescue arrived to treat a possible overdose Dyson.

Mejias told officers that he gave Dyson his credit card information on March 12 to book a hotel room for that evening. The men were supposed to reconvene later. Mejias reportedly told officers that when he arrived at the hotel room around 11 p.m., Dyson opened the door, collapsed on the bed and began vomiting. Mejias said he gave Dyson CPR and called the paramedics. He also said that while giving Dyson CPR, Gillum was in the bathroom, vomiting, according to the report.

Officers reportedly attempted to speak with Gillum but were unable to “due to his inebriated state.” Miami Beach Fire-Rescue said it returned to the hotel a second time to do a “welfare check” on Gillum, who authorities said by that time was stable and had normal vitals.

According to the police report, officers found three small baggies of “suspected crystal meth,” which were located on the bed and floor in the hotel room. The suspected drugs were taken as evidence.

However, there were no criminal charges for any of the men involved and officers said that Gillum left the Mondrian Hotel room “without incident” and returned to his home. Rodriguez, the MBPD spokesperson, told the Democrat no one was arrested because officers “responded to a medical call. The narcotics, although in plain view, were not in physical possession of anyone inside the room. The officers chose to impound the narcotics.”