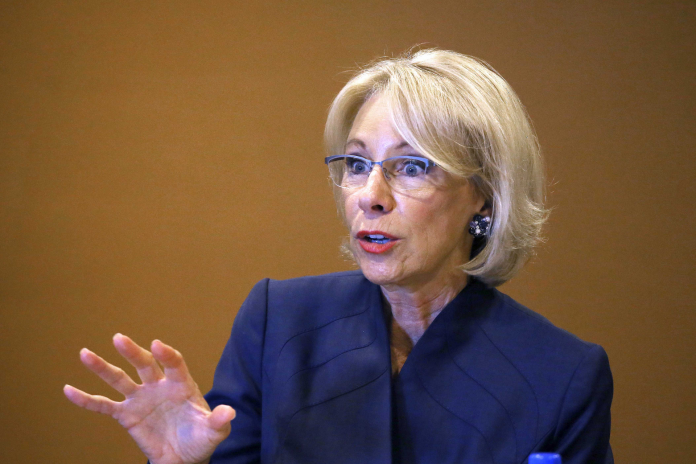 Education Secretary Betsy DeVos compared the abortion rights debate to the battle to eliminate slavery during remarks at a Colorado Christian University event in Washington, D.C., on Wednesday night.

DeVos, a Christian conservative, discussed the Trump administration’s record of opposition to abortion, and said she was reminded of President Abraham Lincoln. “He, too, contended with the ‘pro-choice’ arguments of his day,” she said. “They suggested that a state’s ‘choice’ to be slave or to be free had no moral question in it.”

She said Lincoln reminded “those pro-choicers” that a vast majority of Americans viewed slavery as a vast moral evil. “Lincoln was right about the slavery ‘choice’ then, and he would be right about the life ‘choice’ today,” she said. “Because as it’s been said: Freedom is not about doing what we want. Freedom is about having the right to do what we ought.”

Similar comparisons between slavery and abortion by conservatives have drawn intense criticism. For example, minority members of the Utah Legislature, all of them Democrats, condemned comments by GOP Lt. Gov Spencer Cox comparing abortion to slavery at an Eagle Forum convention earlier this month.

Department officials had said the event at the Museum of the Bible, which included a Q&A session led by conservative radio host Hugh Hewitt, was closed to press coverage. However, a reporter for the Colorado Times Recorder attended and wrote an article first reporting the DeVos remarks.

Students from the university are in the nation’s capital for the annual March for Life on Friday that protests the legalization of abortion.

Last week, DeVos was in attendance as President Donald Trump in his effort to court evangelicals rolled out new guidance on prayers in schools and a proposed Department of Education rule protecting the rights of religious student groups at public universities.

“There are many in the pro-life movement who heroically work to make abortion unconstitutional. Tonight, let’s talk about making it unthinkable,” she said.

In addition, DeVos in her Q&A session with Hewitt said the department’s much-criticized final rule on the Title IX law, which protects students from sexual discrimination or harassment, is coming “soon,” according to the Colorado Times Recorder.

She defended the administration’s efforts to establish a new Title IX framework that is “right and just for all involved,” according to the newspaper.

“We’re very close to a final rule,” DeVos said. “But the goal is to ensure that all students are treated justly and fairly, and we believe that the rule that we will ultimately finalize will be good for all involved.”

Earlier on Wednesday, DeVos had attended oral arguments before the Supreme Court in Espinoza v. the Montana Department of Revenue, a case that could expand the use of public funds to pay for religious schools.

School choice advocates including DeVos hope a ruling in the case will end so-called Blaine Amendments, constitutional provisions in nearly 40 states that bar public funds from being used for religious schools. They note that the amendments were originally enacted to discriminate against Catholics.

“We are especially eager for the Supreme Court to put an end to the ‘last acceptable prejudice’ made manifest in bigoted Blaine Amendments which deny students the freedom to pursue faith-based education,” she said, according to the remarks.