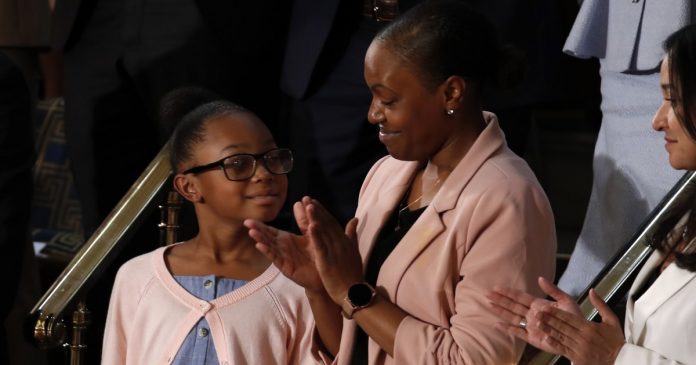 The Philadelphia fourth-grader whom President Trump singled out during his State of the Union address as one of thousands of students “trapped in failing government schools” actually attends a sought-after charter school, reports the Washington Post.

Janiyah Davis and her mother, Stephanie Davis, were seated in the House chamber for the president’s prime-time address last week. Trump said Janiyah was one of thousands of students on a waiting list for private school scholarships, and he urged Congress to pass a federal tax break that would reward donations to these scholarship programs.

In one of several made-for-TV moments, Trump then surprised Janiyah and her mother by announcing that a scholarship had become available. “Your long wait is over,” he said. “You will soon be headed to the school of your choice.”

The next day, officials said the scholarship was being personally funded by Education Secretary Betsy DeVos, a strong backer of what she and other Republicans call “school choice.” But administration officials would not answer any questions about where Janiyah attends school or where she hoped to go.

As it turns out, she attends the popular Math, Science and Technology Community Charter School III, known as MaST III, according to John F. Swoyer III, chief executive of the network that runs the school. The information was first reported in an account Stephanie Davis gave to the Philadelphia Inquirer.

Charter schools are taxpayer funded but independently run and are one of the options that school-choice proponents typically tout. MaST III received 6,500 applications for 100 spots next year, with slots distributed via lottery, Swoyer said. The school enrolls about 900 students.

For grades first through third, Janiyah attended Olney Christian School, which charges $5,200 a year in tuition, the Inquirer reported. Janiyah received a partial scholarship, but it was still a financial struggle to attend. So Janiyah applied to MaST III in northeast Philadelphia, was accepted over the summer and decided to enroll.

Stephanie Davis told the Inquirer that she did not realize her daughter would be mentioned in the State of the Union speech, but that she had been told there was a possibility she would receive a scholarship. She said she isn’t sure whether she will continue to attend her charter school, return to Olney Christian or go somewhere else.

“I don’t view MaST as a school you want to get out of at all. I view it as a great opportunity,” Davis told the paper.

A White House fact sheet released ahead of the State of the Union speech described Stephanie Davis as “a hard working single mother who is hoping for the expansion of school choice to be able to send Janiyah to a school that best serves her needs.”

Efforts by The Washington Post to reach Davis were unsuccessful. Davis told the Inquirer that she does not know why she was chosen to attend the speech, but that she was connected to the White House after receiving a call from the principal at Olney Christian. She said that attending the speech was a “wonderful experience.”

Angela Morabito, a DeVos spokeswoman, did not answer directly when asked why Janiyah was chosen for a DeVos-funded scholarship, given that she is happy with her current school.

“Education freedom is about going to the best school for your child. Even the ‘best’ school, as ranked by statistics and averages, isn’t the best fit for every child. Each of the 50,000 kids waiting for a new opportunity in Pennsylvania has different needs and goals, let alone the millions of students across America stuck in a school that isn’t right for them,” Morabito said in an email.

Trump’s tax credit plan is expected to be included in the budget proposal being sent to Capitol Hill on Monday. The $5 billion plan would create a 100 percent tax credit for individual and corporate contributions to state-sanctioned scholarship funds, meaning donors could get back their entire donation through a reduction to their federal taxes.AD

The donated funds would then be available to help families pay for private education and other expenses, with rules set by each state.

The plan has gained Republican support but almost none from Democrats, who control the House. It went nowhere last year and is not expected to fare any better in 2020.

Still, it may be a political rallying point as Trump seeks reelection. School choice is popular among social conservatives, who want the power to use tax dollars for religious and other private schools. Supporters argue it also will resonate among middle-class voters who cannot afford to pay for private school on their own.