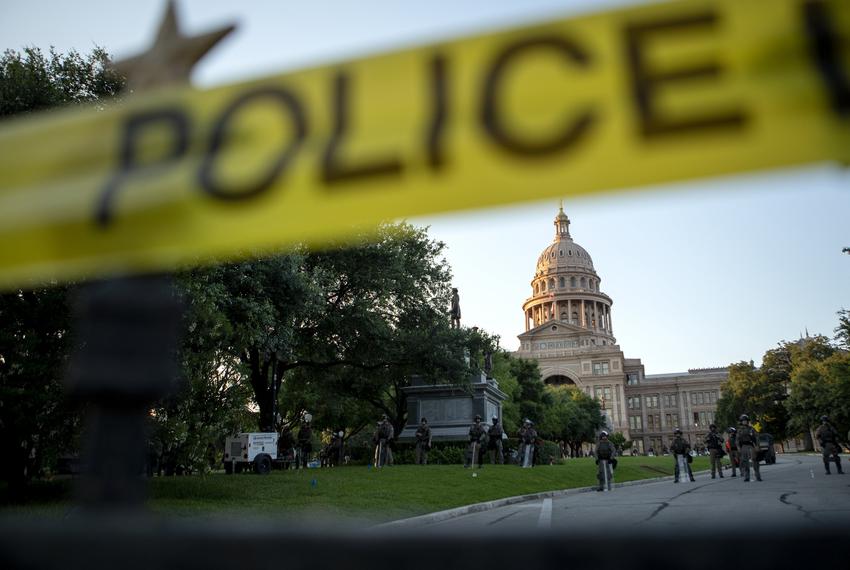 When George Floyd died at the hands of Minneapolis police last month, Texas Gov. Greg Abbott labeled the incident a “horrific act of police brutality” and has since repeatedly said that Texas can’t let such a tragedy happen.

“George Floyd has not died in vain,” Abbott said Monday at a public memorial for Floyd in Houston. “I am committed to working with the family of George Floyd to ensure we never have anything like this ever occur in the state of Texas.”

But the governor has been noticeably silent on Texas’ own high-profile examples of police killings. An Abbott spokesperson did not respond to questions for this story Tuesday.

Last year, Texas police shot and killed 117 people, according to a report by the Texas attorney general’s office. A string of high-profile fatal police shootings and in-custody deaths of black Texans in recent years has sparked protests and widespread calls for police reform and racial justice.

In 2018, former Balch Springs police officer Roy Oliver was convicted of murder in the shooting death of Jordan Edwards, a 15-year-old passenger in a car that was driving away from police. A year later, former Dallas police officer Amber Guyger was convicted of murder for killing Botham Jean, a 26-year-old man who was unarmed at home when the off-duty officer shot him from the doorway. Guyger said she mistook his apartment, which she entered, for her own home.

Last October, a Fort Worth police officer dispatched to perform a welfare check on Atatiana Jefferson instead fatally shot the black woman, who was home playing video games with her nephew, according to The Dallas Morning News. Hearing noises outside her window in the middle of the night, Jefferson grabbed her handgun and went to the window, her nephew later said. The former officer, Aaron Dean, did not identify himself as law enforcement and shot her through the window.

Javier Ambler, who was also black, died last year after Williamson County sheriff deputies held him down and stunned him with a Taser after pulling him over for failing to dim the headlights on his SUV. Ambler repeatedly told officers he wasn’t resisting arrest and that he couldn’t breathe, according to the Austin American-Statesman.

And in Austin, cellphone video recorded by a neighbor showed that Mike Ramos, a black and Hispanic man, was unarmed and driving away from police in April when a police officer shot and killed him. The officer, Christopher Taylor, is on paid leave.

Those high-profile shootings from 2019 and this year are still under investigation. The names of the people killed have been printed on protest signs and shouted alongside Floyd’s during the recent Texas demonstrations. Abbott has not mentioned them.

Rebecca Webber, an attorney for Ramos’ mother, said Tuesday that it’s hard for Brenda Ramos to hear city and state officials speak out for Floyd but not her son.
“Governor Abbott rightfully condemned a murder across the country but what about the awful videos of the killings of Mike Ramos and Javier Ambler right here in our community?” Webber said in an email to The Texas Tribune. “Where is the outrage from officials about these tragedies?”

Since Floyd’s death, Abbott has instead focused his Texas comments on celebrating the state’s criminal justice reforms.

In the aftermath of the state and nationwide protests against police brutality and racial inequity that erupted after Floyd’s death, Abbott has commended Texas’ efforts in the criminal justice world, citing certain state laws, a large number of exonerations and the closure of several state prisons in recent years as examples of recent success. And at Floyd’s memorial in Houston, Abbott told reporters he was open to pursuing more policing reforms, suggesting there’s more to come in next year’s legislative session.

But the governor has not addressed several police reform efforts that state lawmakers repeatedly failed to pass in recent years in the face of opposition from law enforcement. The failed measures include attempts to require investigations into racial profiling and limiting arrests for low-level offenses that are punishable only by fines.

“Remember this: Texas has a legacy of success, whether it be the Timothy Cole Act, the Sandra Bland Act and now maybe the George Floyd Act, to make sure that we prevent police brutality like this from happening in the future in Texas,” he said Monday.

Texas leaders, like Abbott, have prided themselves on the state’s criminal justice reforms. An advocate in 2017 called the state the “gold standard” in combating wrongful convictions after legislative efforts spurred by Cole’s case. Cole died in prison after serving more than two decades for a rape that DNA evidence posthumously cleared him of committing. In Cole’s name, Texas enacted a law in 2009 to increase state compensation given to those who served prison sentences for wrongful convictions. Other laws in following years limited the power of jailhouse informants and set up best practices for police departments conducting lineups.

But more recently, criminal justice reform advocates at the state Capitol have bemoaned failed attempts at change. The repeated inability to pass bills on issues like bail, police practices and the death penalty prompted a bipartisan group of House representatives last year to form a Criminal Justice Reform Caucus in hopes of bolstering their efforts.

The Sandra Bland Act in 2017, though noted for its achievements in mental health and jail reforms, was stripped of most of the sweeping police reform provisions initially included in the bill — like punitive action for officers found to engage in racial profiling and a ban on police using traffic violations as a pretext to investigate other potential crimes. Bland died in an apparent suicide in a Texas jail cell three days after she was arrested during a routine traffic stop.

Last year, lawmakers again tried to limit law enforcement’s ability to arrest people who are suspected of crimes that at most would result in a fine without jail time. That measure again failed “quite spectacularly,” said Chris Harris, director of the criminal justice project for the advocacy group Texas Appleseed.

Lawmakers were also unsuccessful last year at closing the so-called “dead suspect loophole,” which allows law enforcement to withhold videos and records from the public in criminal cases if the suspect has not been convicted — even if the suspect died in police custody.

“There was a time where Texas could plausibly claim some leadership on criminal justice issues more broadly, but I think that time has passed,” Harris said.

Some have blamed the recent failures of those reform attempts on police unions. State Rep. Joe Moody, an El Paso Democrat who was heavily involved in both 2019 bills and leads the Criminal Justice Reform Caucus, said the biggest roadblock has been the Combined Law Enforcement Associations of Texas. The union opposed both 2019 measures in the final days of the legislative session in May.

“What’s changed now is, in the past, a group like that thought that they defined the parameters of the debates,” Moody said Tuesday. “They don’t.”

Harris that agreed Floyd’s death and the reaction that has followed have inspired people to look at why unions wield so much power.

However, Charley Wilkison, executive director of the Combined Law Enforcement Associations of Texas, says the union’s wishes are often rejected at the Capitol, and he attributed successes to his organization’s long-standing partnerships with both parties.

“I would hardly describe us as an organization that’s been out manhandling legislation,” he said.

Wilkison said he would support police changes that would create more training or raise standards for new officers.

Abbott has not made clear how or if he would stand up against police groups’ wishes when they conflict with renewed calls for reform. Although the governor has said he discussed potential legislation with lawmakers and raised the idea of naming a new law in honor of Floyd, he has not specified any issues or policies such a bill would address.

And while a spokesperson did not specify with whom the governor had spoken, those consulted apparently do not appear to include the 17-member Texas Legislative Black Caucus. The group requested to meet with Abbott last week to discuss paths forward to address police misconduct and criminal justice reforms.

“We are somewhat perplexed that, to date, the members of the TLBC have not been included in your discussions with Legislators regarding possible legislative solutions to halt and prevent the horrific act(s) of police brutality,” state Rep. Harold Dutton, a Houston Democrat who leads the caucus, wrote in a letter to the governor.

Dutton told The Texas Tribune on Tuesday that the governor has since agreed to a virtual meeting, which is scheduled for Wednesday.

State Rep. Garnet Coleman, a fellow caucus member, said Tuesday that lacking gubernatorial guidance, he and state Sen. John Whitmire, both Houston Democrats who authored the Bland legislation and chair committees involved in criminal justice legislation, would again push to enact provisions removed from the 2017 bill named in the woman’s honor. Coleman also said they will look at other suggestions in light of Floyd’s death, like getting rid of choke holds.

Moody said it is now imperative to close the dead suspect loophole and to limit arrests for minor infractions like traffic violations. Harris hopes the current political climate will lead to a more successful criminal justice session in 2021.

“There’s a lot to do, and I’m very hopeful that given the broad swell of support for efforts to limit police power and to demilitarize police, that we can do that,” he said.