DefenderNetwork.com
Home NEWS National Gov. Kemp getting pressure to unveil how he ‘stole’ election from Stacey... 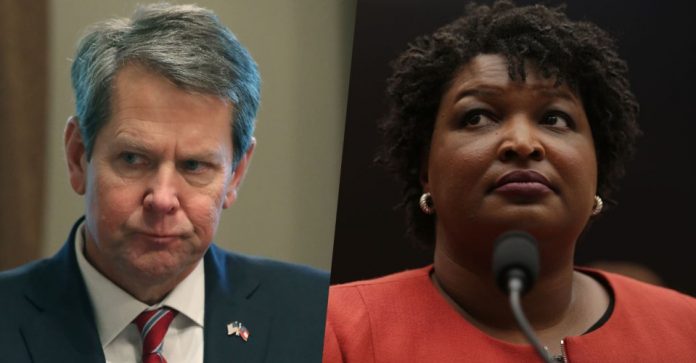 Georgia Gov. Brian Kemp might have to explain how he purged more than half a million voters from the ballot that cost Stacey Abrams the race.

The long-debated “stolen” gubernatorial election could finally be put to rest. In a federal lawsuit that was initiated by journalist Greg Palast and Helen Butler, executive director of watchdog organization Georgia Coalition for the People’s Agenda, the judge ruled against Kemp.

The governor may be required to release the lists of the names suppressed as well as his methods for removing them, according to 11 Alive.

Georgia Coalition for the People’s Agenda is one of the civil rights groups challenging Georgia’s restrictive voter registration law that requires voter data to “exactly match” data stored in the state drivers’ services database or the Social Security database.

According to Campaign Legal, Georgia’s use of its “exact match” protocol disproportionately and negatively affects eligible people of color registered to vote — a violation of federal voting statutes and the U.S. Constitution.

“Kemp and the new Sec. of State of Georgia want to keep the lid on their methods for removing literally hundreds of thousands of low-income, young and minority voters on the basis of false information, Palast told Essence. “They cannot hide anymore. This is a huge win and precedent for reporters trying to pry information from the hands of guilty officials.”

In the lawsuit, Kemp used his power as secretary of state to purge 700,000 legitimate voters from the state’s voter rolls between 2016 and 2018. The racially based methodology for removing voters is potentially the real reason why Abrams lost what is considered a very close race.

The suit also stated that the secretary of state’s office did not notify individual voters that their votes got removed.

The lawsuit said that Palast had “uncovered a so-called ‘purge list’ during his research from what is called the ‘Crosscheck Program’ allegedly supplied to Kemp’s office by now-former Kansas secretary of state Kris Kobach,” 11 Alive reported.