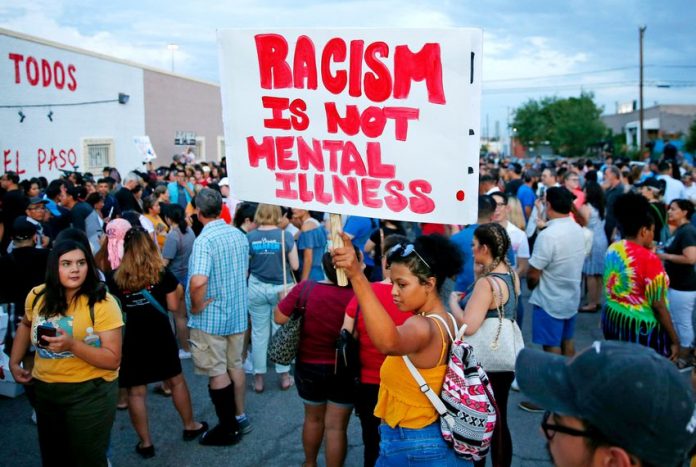 Hours after a white gunman walked into an El Paso Walmart on Saturday and killed nearly two dozen Hispanic shoppers, Texas Gov. Greg Abbott addressed a room full of reporters in the border city and expressed grief and support for the community.

As high-profile mass shootings continue to erupt across the country — three of which occurred in Texas in the last two years — a reporter asked the governor what he planned on doing to ensure one doesn’t happen again.

Abbott, a Republican, hesitated, then spoke at length about how the state Legislature reacted to the 2018 high school shooting in Santa Fe, eventually focusing on what he said was the most agreed-upon need: addressing mental health issues.

“Bottom line is mental health is a large contributor to any type of violence or shooting violence, and the state of Texas this past session passed a lot of legislation and provided funding for the state to better address that challenge,” he concluded, referring to bills aimed at improving children’s mental health care.

Behind him, U.S. Rep. Veronica Escobar, a Democrat from El Paso, visibly stiffened, shaking her head slightly as Abbott connected mental illness to what appears to be an act of domestic terrorism fueled by a white supremacist ideology.

The next day, before a downtown El Paso vigil for the victims, she put into words what had been apparent on her face.

“I would also call on those who use mental illness as an excuse to please stop. Please stop,” Escobar told reporters, to light applause from those beginning to arrive for the service. “It further stigmatizes those who truly suffer from mental illness, and the fact of the matter is people with mental illness are far more likely to be victims of violent crime, not perpetrators.”

“This tragedy is not in vain if we can finally have a reckoning in this country as to what is really going on,” she added.

Research on mass killings and serious mental illness doesn’t usually back this notion, though results vary depending on how attacks and mental illness are classified.

A 2015 study of about 230 mass homicides since 1913 found that only 22% of the killers could be considered mentally ill. Examining only the killings from this millennium, however, the author, a forensic psychiatrist, considered 32% of the killers mentally ill. A 2016 study found only 15% had a psychotic disorder and 11% had paranoid schizophrenia. But smaller, more recent government reports indicate higher levels — a U.S. Secret Service report of 27 mass attacks in 2018 found that 44% of attackers had been treated for or diagnosed with a mental illness.

“We shouldn’t immediately jump to blaming mental illness, because one, it’s impossible to make that determination without having facts to back that up and, two, there are often other causative/aggravating factors that need to be explored,” Greg Hansch, the executive director of Texas’ branch of the National Alliance on Mental Illness. “Certainly in the case of El Paso, it seems like it was a hate crime.”

There has been no information released regarding the mental health of the suspected gunman in Saturday’s massacre. The 21-year-old allegedly did, however, publish a racist manifesto before the shooting in which he described the attack as a “response to the Hispanic invasion of Texas.”