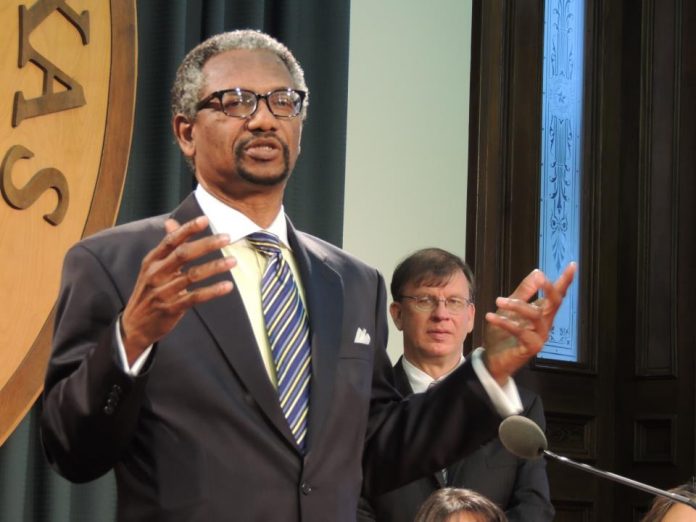 State Rep. Harold Dutton, who is facing a runoff after this week’s primary election, said Thursday he may ask the Harris County district attorney’s office to investigate the candidacy of an opponent who was seemingly absent from the campaign trail.

“The more and more I’ve gotten into this, the more and more it sounds like something criminal went on, which bothers me a little bit,” the Houston Democrat told The Texas Tribune. “That would affect the whole Democratic process in some respects — and that just shouldn’t happen.”

On Wednesday night, ABC13 reported that the candidate in question, Natasha Ruiz, identified herself as “Natasha Demming” when reached by phone and said she worked as a truck driver in Colorado. Ruiz told the Houston television station she did not know why her name would have been used to sign up to run for the House seat. Ruiz did not respond to a call and a text message Thursday from a Texas Tribune reporter.

The report came the day after Dutton, who has served in the lower chamber since 1985, advanced to a runoff with Houston City Council member Jerry Davis. Dutton received roughly 45% of the vote to Davis’ 25%, while Ruiz got about 20% and Richard Bonton, who ran for the seat in 2018, received almost 9%. Dutton and Davis will compete in a May runoff for the nomination to House District 142, which has historically been held by a Democrat. It’s arguably one of the most competitive reelection bids Dutton has faced while in office.

Dutton, who said he has already hired a private investigator to look into Ruiz’s candidacy issue, told the Tribune that questions about it were first brought to his attention a few weeks ago, when an anonymous letter sent to his law office pointed out discrepancies between Ruiz and a “Natasha Nicole Demming.”

A copy of Demming’s voter registration record with Harris County was attached and included her address and phone number, which matched the paperwork Ruiz filed with the Harris County Democratic Party in December, though Ruiz wrote on the candidate filing that her full name was “Natasha Demming Ruiz” and her ballot name was “Natasha Ruiz.” Ruiz also listed her occupation as a teacher.

Ruiz’s candidate filing paperwork, which was reviewed by the Tribune, was notarized by Marc Malacoff, who works for the local party. DJ Ybarra, executive director for the Harris County Democratic Party, said that Ruiz showed a Texas driver’s license with an expiration date as her form of photo ID when submitting that paperwork.