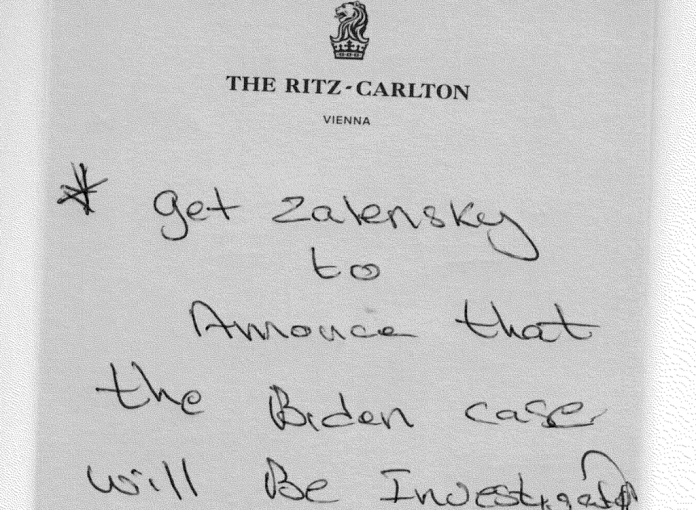 Democrats in the U.S. House of Representatives said on Tuesday they would include new evidence when they send formal impeachment charges against President Donald Trump to the Senate on Wednesday, seeking to expand the scope of a trial that will dominate Washington for the next several weeks.

Senior Democrats said they would include phone records and other documents provided by Florida businessman Lev Parnas when they make their case that Trump abused his power by pressuring Ukraine to investigate a political rival, Democratic former Vice President Joe Biden.

Parnas was an associate of Trump’s personal attorney Rudy Giuliani, who says Parnas helped him investigate Biden. The Ukraine-born Parnas has pleaded not guilty to federal campaign-finance violations in a separate criminal case.

The late inclusion of Parnas’ records, which were only made available to investigators in the last few days, suggested Democrats were trying to further substantiate their case before it heads to the Senate for trial.

Trump became only the third U.S. president to be impeached when the Democrat-majority House last month approved charges that he abused the powers of his office and obstructed Congress in its investigation into his conduct.

The House will vote on Wednesday to send the impeachment charges to the Republican-controlled Senate, kicking off a trial that could last through early February. It will also name the House lawmakers who will prosecute the case against Trump.

Those lawmakers will walk in a procession through the U.S. Capitol to the Senate to present the articles of impeachment to the secretary of the Senate around 5 p.m. EST (2200 GMT) on Wednesday, House Speaker Nancy Pelosi’s office said in a statement.

The Senate is expected to acquit Trump, as none of its 53 Republicans have voiced support for ousting him, a step that would require a two-thirds majority in the 100-member chamber.

Pelosi had delayed sending the impeachment charges to the Senate in an unsuccessful effort to get Republicans who control the chamber to agree to include new witness testimony that could be damaging to the Republican president.