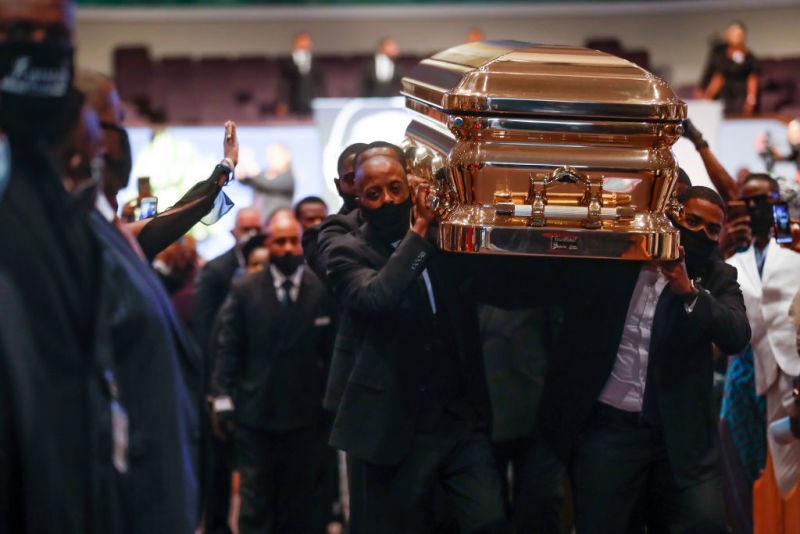 George Floyd may have seemed like an ordinary man, but little did he and those who loved “Big Floyd” know he was always a man tasked with a tremendous assignment, Congresswoman Sheila Jackson Lee reminded those who packed the Fountain of Praise Church on Tuesday morning. 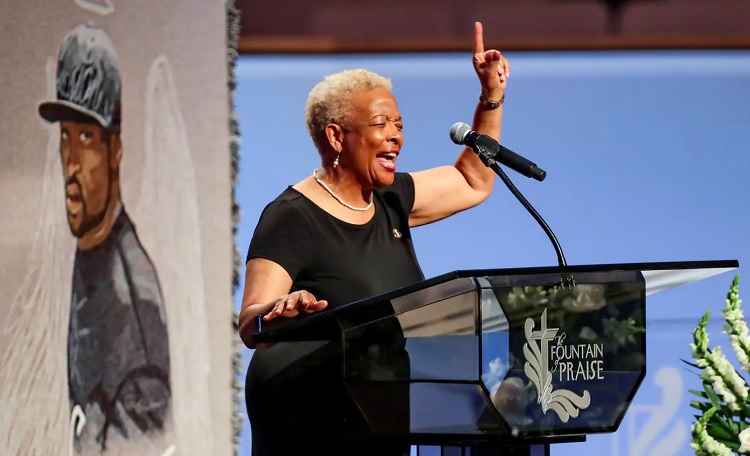 The ordinary man from the Third Ward was here to help change the world and it seems that the senseless way his life was taken away on May 25 when a white police officer in Minneapolis drove his knee into Floyd’s neck for 8 minutes and 46 seconds until his body lay lifeless in the street. Floyd, a Houston native and beloved in the Third Ward, died that day but a movement that was rumbling around his funeral service lives.

His death has sparked a national uprising and has citizens and lawmakers talking about police reform, racial discrimination and the senseless killings of Black men at the hands of white police officers in ways that might bring serious change. 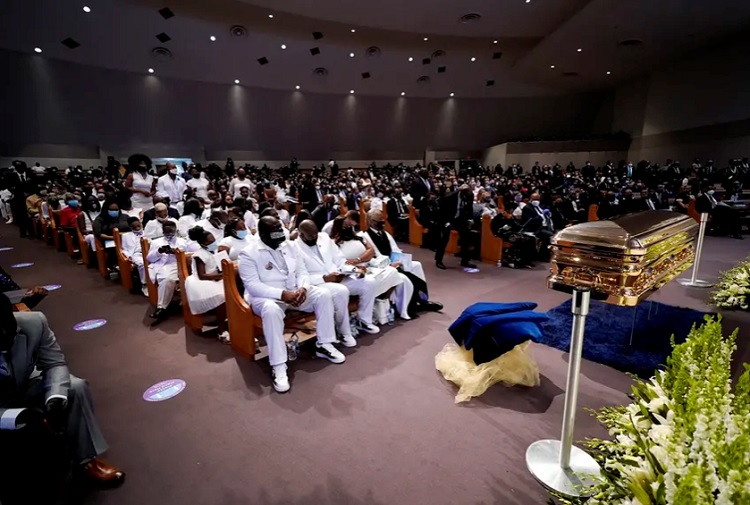 “His assignment turned into a purpose and that purpose is around the world there are people rising up that will never sit down until you get justice.”

The funeral services of a man who was not known to most of the world just three weeks ago brought dignitaries like Civil Rights leader Al Sharpton, Congressman Al Green, Democratic Presidential hopeful Joe Biden and Mayor Sylvester Turner, while drawing a near-packed house in the 3,000-seat sanctuary and hundreds of local and national media members on the outside of the mega church for the private service. The public viewing on Monday saw 6,300 pass through Fountain of Praise.

This week’s services were the last of three national memorials for Floyd, whose final resting place is in Houston next to his deceased mother.

“We stand with you, we will be there for you,” Green said before turning his attention to the rest in attendance and watching. “Let’s let them know they are not alone, let’s give them some love, let’s say to this family we are here to stay.”

“We are not fighting some disconnected incidents. We are fighting an institutional, systemic problem that has been allowed to permeate since we were brought to these shores. We are fighting wickedness in high places,” civil rights activist the Rev. Al Sharpton said in a eulogy for Floyd.

“Until we know the price for black life is the same as the price for white life, we’re going to keep coming back to these situations over and over again,” Sharpton added. “I want to give a commitment to the family that we’re going to be here for the long haul. When the last TV truck is gone, we’ll still be here.”

Rev. William “Bill” Lawson commented, “The prejudice and the bigoted are not going to change, but we can do some things to change them. And that’s what I hope we will do.”

Rev. William “Bill” Lawson at George Floyd’s funeral: “The prejudice and the bigoted are not going to change, but we can do some things to change them. And that’s what I hope we will do.” https://t.co/PeN6Eke5X4 pic.twitter.com/HAfM2UIWCU

In the hymn-filled sanctuary, relatives told personal stories about Floyd. One of his aunts said that although the world may now know her nephew by his name or his last words — “I can’t breathe” — which have become a rallying cry, she knew Floyd as “Perry Jr.” Floyd’s mother, she said, was lovingly known as “Miss Sissy.”

“I’m going to miss my brother a whole lot,” added one of Floyd’s brothers through tears. “I love you and thank God for giving me my own personal superman.” After he spoke, he immediately sought solace from other family members, who all stood onstage wearing white.

One of his nieces, Brooke Williams, laughed as she remembered that Floyd would always ask her to scratch his head after long days at work. Her speech was marked by both defiance and sorrow, advocating for police reform yet reminiscing on happier times with her uncle, like when he would call her “baby girl” and tell her she was “going to go so far with that beautiful smile and brain of yours.”

“Someone said, ‘Make America Great Again,’” she said. “But when has America ever been great?”

Although mourners cried behind face masks, the event was also marked by celebration.

Cyril White, the founder of To God Be The Glory Sports, spoke alongside the family and announced Tuesday that he’s secured a commitment for three acres of land to host a Floyd memorial sports center. (Floyd had been a star football and basketball player in high school.)

An artist painted a black-and-white mural of Floyd as someone sang a rendition of “A Change Is Gonna Come.” Mourners swayed from side to side as singers sang various gospel hymns.

During his speech, Turner declared June 9 to be George Floyd Day in the city of Houston. 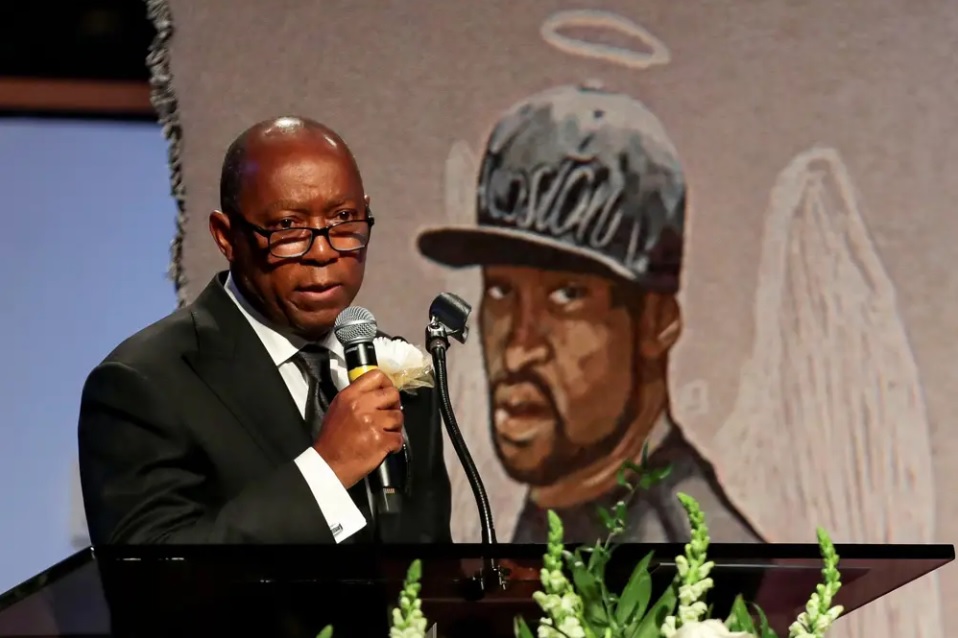 Houston, where Floyd grew up, has adopted several tributes and memorials dedicated to him. Several miles away from the Fountain of Praise Church, there’s an image of Floyd on a brick wall drawn in chalk. His head has a halo atop it, while angel wings come out of his torso. In large letters next to his face reads, “In loving memory of BIG FLOYD.” An outline of Texas is drawn in the middle of the “O.” Flowers and balloons are scattered on the surrounding ground.

“Your family’s going to miss you, George, but your nation is going to always remember your name,” Sharpton said as he closed out Tuesday’s services. “You fought a good fight. Go on and get your rest now. Go on and see momma. We’ll fight on.”

Several in the crowd stood and wept.