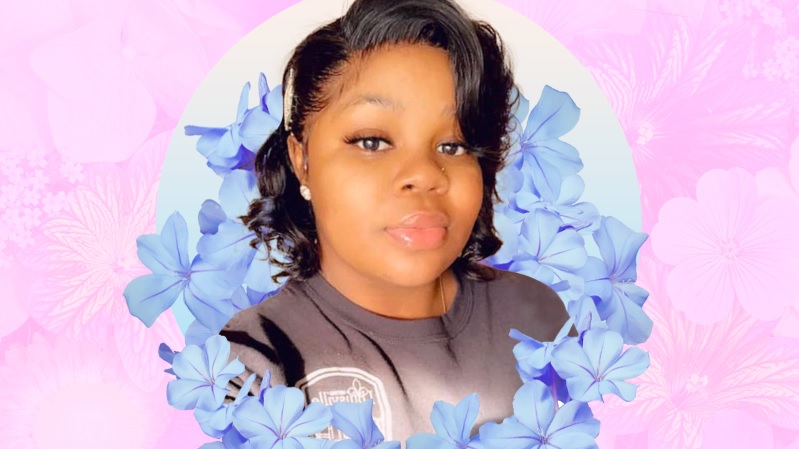 Breonna Taylor would have been 27 today.

Taylor was an EMT who worked at two local hospitals in Louisville, Kentucky, including amid the coronavirus pandemic. She was a daughter, a granddaughter, a sister, a niece and a best friend. “Breonna Taylor was full of life and loved social gathering with her friends and especially her family,” her obituary reads. “She loved life and all it had to offer.”

On March 13, Taylor was killed by Louisville Metro Police. She and boyfriend Kenneth Walker were in their own home when police made a late-night raid on the wrong address, looking for someone who had been taken into police custody hours earlier. Taylor was shot eight times.

Following global protests, justice came for George Floyd on Wednesday, when all four officers responsible for his death were charged. But more than two months after her killing, Taylor has not had similar justice.

On what would have been her birthday, here are the ways you can pay tribute to Taylor and call for justice and change in her name.

The police officers who murdered Breonna Taylor still haven’t been arrested or charged. Friday June 5th would have been her 27th birthday. Here are some resources on how we can help bring her killers to justice & bring awareness to this injustice! https://t.co/KzGGLTs6Wq pic.twitter.com/LYsyPtPxCL

The death of George Floyd may have served as the spark to protest — and his name has often lent itself to them — but this movement is a response to the continued killings of many more black people, Taylor included, by police.

Breonna Taylor’s name — and the names of Sandra Bland, Korryn Gaines, Atatiana Jefferson, Shantel Davis and Pamela Turner, among too many other women — should never be forgotten as we continue fighting to bring justice to each of them.

Continue to say her name, whether in the streets protesting or on social media: On Friday, use hashtag #SayHerName and #BirthdayForBreonna to share tributes, artwork and calls to action, as organized by Cate Young (@battymamzelle on Twitter).

Tomorrow SHOULD be Breonna Taylor’s 27th birthday. Need to protest from home? Send birthday cards to KY officials demanding #JusticeForBreonna and be apart of #BirthdayForBreonna. pic.twitter.com/YpzFHQlgg6

Cards should be addressed as follows:

Office of the Attorney General

The easiest way to lend your voice is to sign these petitions:

Here is what the “Justice for Breonna Taylor” petition calls for:

1. Charges must be filed immediately. Arrests of the officers involved, specifically John Mattingly, Brett Hankison, Myles Cosgrove, and any other officer involved in the death and coverup of the death of Breonna Taylor must be made NOW. There have been no charges thus far (it has been a month). This is unacceptable.

2. Her family must be paid in damages for wrongful death and the negligence of the LMPD.

3. Kentucky Governor Andy Beshear must speak up on behalf of Breonna, and Governor Beshear or Attorney General Daniel Cameron must appoint a special prosecutor to investigate the Louisville Police Department immediately. An in-house investigation is unacceptable.

4. The “no-knock” warrant that police had used in Breonna’s murder completely violates the constitutional rights to reasonable search and seizure. By law, police must be legally obligated to announce themselves before breaking and entering into a home privately owned by American civilians. Legislation to federally ban no-knock warrants must be passed in Congress and signed by the President; what happened to Breonna was a complete violation of her constitutional rights, and threatens the rights of all American citizens. Senator Rand Paul of Kentucky has voiced similar concerns. A special session must be intervened by Congress to discuss the constitutionality of no-knock warrants immediately.

You can donate directly to Taylor’s family via this verified GoFundMe set up by Taylor’s aunt, Bianca Austin. “First off, we are SO THANKFUL for EVERYONE standing up for justice and saying her name! We’re not stopping until we truly get justice! All of you are such a blessing!” Austin writes.

“Second of all, we are thankful for the offers for donations. My sister and niece are too proud to say it, but this is a tough fight and it does take a toll,” she continues. “They’re both hard workers and they’re missing out on some work (and sleep!) in this fight for justice.”

Here is the verified GoFundMe to support the family of Breonna Taylor—the 26-year-old EMT who was fatally shot in her Kentucky home. All funds raised will be sent to Breonna’s family to assist them in the their fight for justice. https://t.co/HNxRfZ4nuP