Politics is such a natural force in Florida that not even a hurricane can stop a campaign. And that is especially true when a part-time resident, Donald J. Trump, lives in the White House.

Tallahassee Mayor Andrew Gillum suspended his campaign for governor Sunday to return to the city as it prepared for a battering by Hurricane Michael. President Trump was in Orlando Monday night, and threw a couple jabs at the mayor while trying to give his endorsed candidate, Ron DeSantis, a boost.

In the interview with WFTV, Trump placed the blame on Gillum’s shoulders for a city that he said is plagued with a lot of problems, “tremendous corruption” and “tremendous crime.”

“(DeSantis) opponent runs an area and a city that’s got among the worst statistics in the country and certainly in the state,” Trump said. “If his opponent gets elected, you’ll have Venezuela. Florida will become another Venezuela and that’s not good.”

Gillum called a foul on the President.

“Hey @realDonaldTrump — don’t come to my state and talk trash about my city while we are preparing for a Category 3 hurricane. We need a partner right now, not a partisan,” Gillum tweeted in response once the comments were broadcast. 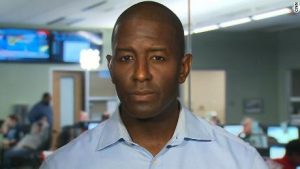