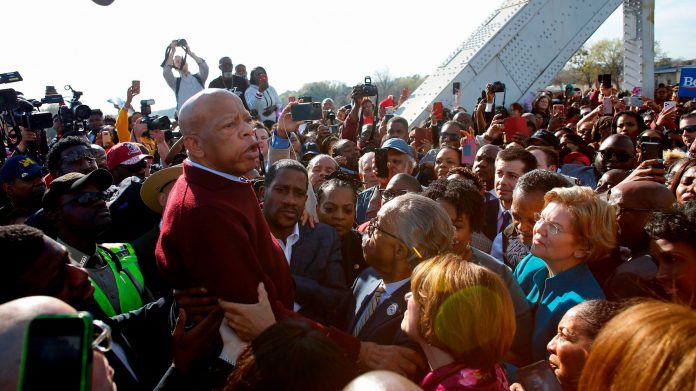 Rep. John Lewis (D-Ga.) called on voters to “redeem the soul of America” at the ballot box in November during a speech Sunday ahead of the 55th anniversary of his march at Selma.

CNN reported that Lewis, an icon of the civil rights movement, made the comments at an event commemorating the “Bloody Sunday” march of 1965, during which Lewis had his skull fractured by a white police officer while marching for voting rights.

“We must go out and vote like we’ve never voted before,” Lewis told march attendees on Sunday. “Speak up. Speak out. Get in the way. Get in good trouble, necessary trouble, and help redeem the soul of America.”

Lewis’s comments are his latest indirect salvo against President Trump, who he has said is a racist while enduring attacks from the president aimed at his district’s crime statistics.

The Georgia Democrat and influential member of the Congressional Black Caucus (CBC) has not endorsed a 2020 candidate for president, telling reporters last year that he was not leaning toward making an endorsement.

“I’d like to see the best possible person be elected, and it doesn’t matter whether they’re from CBC or the Democratic Party,” Lewis told The Hill last April.

“I’m not leaning toward making an endorsement, not at all,” he added.