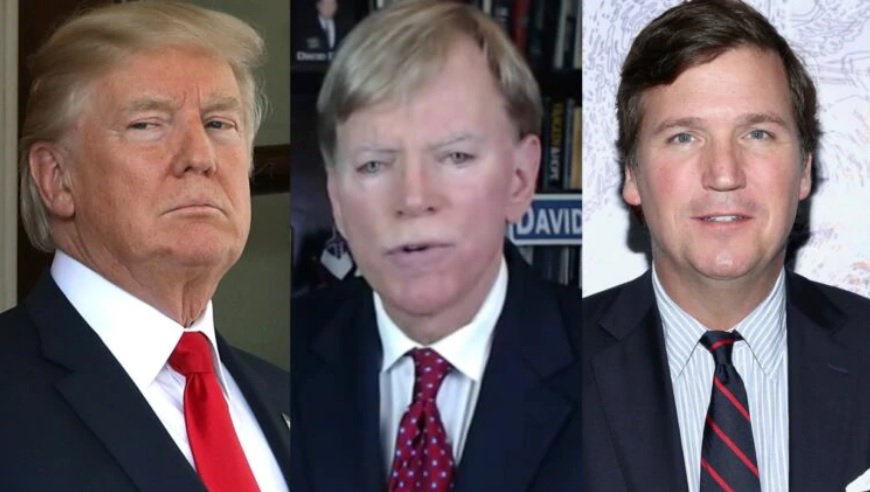 David Duke, the former leader of the Ku Klux Klan (KKK), has noted his support for Donald Trump’s re-election.

Duke noted that having a Trump/Carlson ticket is the only way to “stop the commie Bolsheviks.”

“President Trump! You have one last chance to turn the tables, win this election and save America — and yourself,” Duke posted on Twitter July 8. “Nominate Tucker Carlson for Vice President. This would energize your campaign beyond belief,” he added.

We have every right to fight to preserve our nation, heritage and culture. When vandals like Tammy Duckworth and Ilhan Omar tell us that we’re not allowed to question their patriotism, as they scream about how horrible this country is, we have every right to laugh in their faces. pic.twitter.com/0xjVtUaG3P

“Tucker Carlson now! We DON’T HAVE 4 YEARS. In 4 years there will be no dissident websites, platforms or email addresses, no dissidents allowed credit cards or bank accounts. No Freedom and Tucker will be off air before Biden is even sworn in. Tucker NOW! 4 Years is TOO LATE,” Duke tweeted.

“One more thing about Tucker Mr. President. It would make you IMPEACHMENT PROOF! And Tucker would whip those Republican cucks in line and make them defend our freedom of speech and the heritage of the American people!”

We have a totally corrupt previous Administration, including a President and Vice President who spied on my campaign, AND GOT CAUGHT…and nothing happens to them. This crime was taking place even before my election, everyone knows it, and yet all are frozen stiff with fear….

Duke developed a slight case of Trump derangement syndrome back in 2017 when he had a meltdown over the president condemning white supremacy, theGrio previously reported.

“Racism is evil, and those who cause violence in its name are criminals and thugs, including the KKK, Neo-Nazis, white supremacists and other hate groups that are repugnant to everything we hold dear as Americans,” Trump said after being criticized for saying that the violence and hatred was a result of “many sides.”

I would recommend you take a good look in the mirror & remember it was White Americans who put you in the presidency, not radical leftists. https://t.co/Rkfs7O2Ykr

“It’s amazing to see how the media is able to bully the President of the United States into going along with their FAKE NEWS narrative,” Duke said in a series of tweets claiming Trump had been manipulated by pressure from the media.

In a tweet in Thursday, Duke bragged that “Forbes said my support for Trump as the number 1 of 10 reasons why Trump won the nomination and election,” he wrote. “It sent a powerful signal to white folks & separated him from the field. Now, I say Trump has to get Tucker as his VP to win this crucial election & We need Tucker as the VP!”