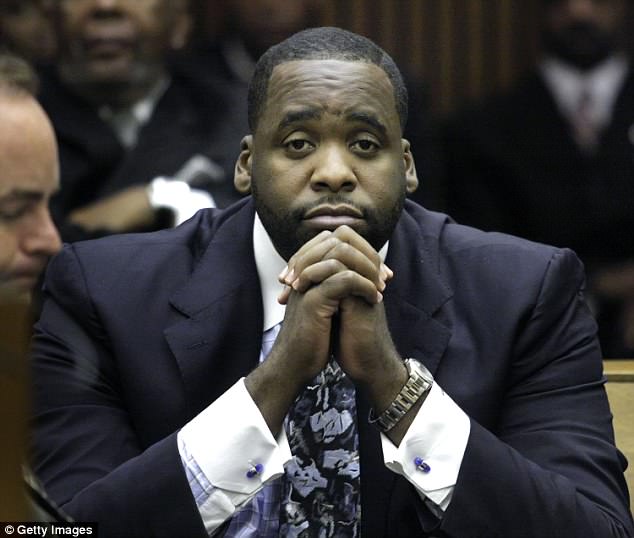 As President Donald Trump granted relief Tuesday to 11 white-collar criminals, no word came from the White House regarding the fate of Kwame Kilpatrick — Detroit’s imprisoned ex-mayor who is also hoping for some Oval Office intervention.

Kilpatrick, with the help of millionaire friend Peter Karmanos, sought clemency from Trump last year,  hoping the president will commute his 28-year prison sentence stemming from his 2013 public corruption conviction.

As of now, Kilpatrick isn’t eligible for release until 2037. If Trump doesn’t intervene, the former mayor will be 67 years old when he gets out.

But as of 6:30 p.m., federal prison records showed that Kilpatrick was still locked up. And his lawyer had received no word of a commutation.

Kilpatrick’s appeals lawyer, Harold Gurewitz, said that he had not been contacted by any White House officials on Tuesday, though he noted that might not happen anyway. He said the White House would likely contact the courts first.

The U.S. Attorney’s office also had received no word from the White House.

Kilpatrick, meanwhile, has a millionaire-businessman friend lobbying on his behalf. Karmanos disclosed last month on the “NO BS Newshour” podcast that he was lobbying to help free Kilpatrick, saying the ex-mayor got a raw deal from the feds, and that Trump is seriously considering a request to pardon him.

“I’m going to continue to push. It’s not right,” said Karmanos, adding he believes Trump may help Kilpatrick in exchange for Kilpatrick helping him win black votes in the November election.

The White House has declined comment on Kilpatrick’s request.

Trump, meanwhile, announced on Tuesday that he commuted the prison sentence of former Illinois Gov. Rod Blagojevich, a Democrat who was accused of trying to sell his U.S. Senate seat and served eight years of a 14-year sentence for pay-to-play crimes.

Trump also announced pardons for former New York police commissioner Bernie Kerik, convicted of tax fraud and lying to officials; Mike Milken, an investment banker known as the “Junk Bond King” who was convicted of securities fraud and conspiracy; and Eddie DeBartolo Jr., ex-owner of the San Francisco 49ers who pleaded guilty in 1998 to failing to report a felony in a bribery case.

Kilpatrick, who was convicted by a federal jury on a slew of public corruption crimes, has long argued that he was wrongfully convicted and punished too harshly. He filed multiple appeals but lost them all. He also appealed to the U.S. Supreme Court, which declined to hear his case.

Kilpatrick, meanwhile, has quite a lot of bills to pay when he gets out of prison, including: