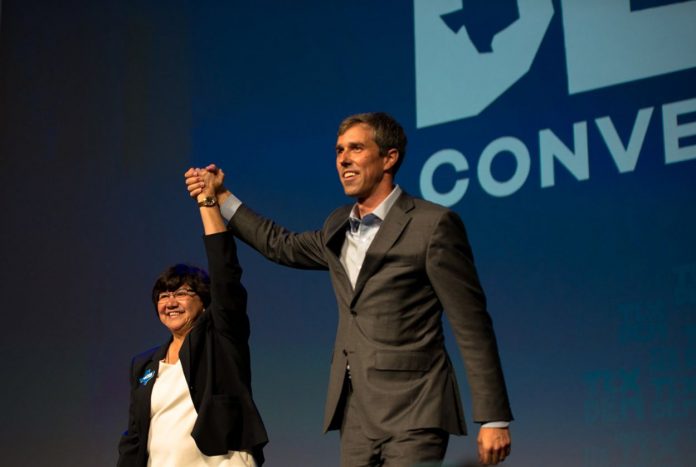 Texas Democrats, including some of their top candidates in November, are beginning to grapple with an issue that is steadily gaining support at the national level: whether to abolish Immigration and Customs Enforcement.

ICE, which is the main federal agency in charge of immigration law enforcement, has become an increasing target of some liberal activists who believe it has abused its power under President Donald Trump. The calls to eliminate the agency — or at least ratchet up scrutiny of it — reached a new volume last week after Alexandria Ocasio-Cortez pulled off a stunning primary upset against U.S. Rep. Joe Crowley, a member of House leadership from New York, running on an abolish-ICE platform.

The win by Ocasio-Cortez, who had visited the Texas-Mexico border in the home stretch of her race, immediately elevated her status nationally and sent the the #AbolishICE hashtag trending on social media, prompting Democrats across the country to weigh in more directly on what until then was a slow-building rallying cry.

“The good thing about Alex winning is it forced Democrats that usually play it safe to come out and really address the problem,” said Linsey Fagan, an ally of Ocasio-Cortez who is running against U.S. Rep. Michael Burgess, R-Lewisville.

In Texas, there is far from a consensus on the issue among Democrats at this early stage. But it is nonetheless receiving fresh attention here against the backdrop of Ocasio-Cortez’s victory, the still-unfolding family separation crisis at the border and the implementation of the “sanctuary cities” ban that Republican Gov. Greg Abbott signed into law last year.

Among those explicitly calling for the end of the agency in Texas is U.S. Rep. Al Green of Houston. In a statement Monday night, Green said the family separation issue has “placed a stain on our Nation’s global image” and that it was time for a new agency, much like when the Immigration and Naturalization Service was ended in 2003 and its functions were handed over to other entities, including ICE.

Politically, the issue has already flared up in the U.S. Senate race between Republican incumbent Ted Cruz and U.S. Rep. Beto O’Rourke, D-El Paso. Asked about abolishing ICE Friday at a town hall in San Antonio, O’Rourke discussed the need to eliminate fear in immigrant communities under Trump and to find a better way to enforce immigration laws. “And if that involves doing away with this agency, giving that responsibility to somebody else, changing how this agency performs, I’m open to doing that,” O’Rourke said.

Yet he went on to flatly answer no when directly asked if he would abolish ICE, explaining that he does not currently know enough about how immigration law would be enforced without the agency.

“I understand the urgency of this,” O’Rourke said in conclusion. “I just want to make sure that we’re constructive in how we talk about meeting this challenge and that I understand what abolishing ICE would mean in terms of enforcing our laws going forward.”

Cruz’s campaign seized on the part of O’Rourke’s response where he said he would be “open” to doing away with ICE, and it singled out his broader suggestion that the agency was responsible for the fear in the immigrant communities.

“Sen. Cruz believes that ICE agents work hard to secure our borders and keep Americans safe,” Cruz spokeswoman Emily Miller said in a statement. “He fully supports keeping the agency in charge of removing illegal immigrants from the United States.”

O’Rourke is not the only Democratic statewide candidate who has recently encountered questions on the campaign trail about doing away with ICE. There is also gubernatorial nominee Lupe Valdez, who has a long history with ICE as the former Dallas County sheriff.

Asked Monday about her position on abolishing ICE, Valdez said in a statement to The Texas Tribune that the way Republicans have used the agency under Trump warrants a serious review of it.

“Trump and his yes-men, like Abbott, brought us here, but I know that our nation can do better,” Valdez said. “We should look into ICE, hold it accountable for its cruel tactics, and reform it so that we can keep our country safe and secure from terrorists and violent criminals without betraying our legacy as a people who welcome those seeking refuge and an opportunity for a better life.”

Other prominent Texas Democrats are enthusiastically showing their support for abolishing the controversial agency. State Sen. Sylvia Garcia, the presumptive next congresswomen from the 29th District, led an “Abolish ICE!” chant over the weekend at a rally in Houston, flanked by two large red-and-black banners bearing the phrase. At least one other elected official at the rally, state Rep. Carol Alvarado, chanted along with Garcia.

Even before the confluence of events last week, some high-profile Texas Democrats were voicing deep apprehension about ICE as it currently exists. Among them was Julián Castro, the former U.S. housing secretary and San Antonio mayor.

“I think that ICE, the way that we know it now, should not go on — that in the least, it needs significant reform,” Castro told reporters last month at the Texas Democratic Party convention in Fort Worth, according to the Texas Observer.

Castro is mulling a 2020 presidential run, and he is not the only presidential candidate who has recently aligned him- or herself with the abolish ICE movement. U.S. Sens. Kirsten Gillibrand of New York, Elizabeth Warren of Massachusetts and Kamala Harris of California have all made comments since Ocasio-Cortez’s win signaling an openness to scrapping the agency in its current form.

The growing chorus has prompted attacks and barely concealed glee from Trump, who predicted in a TV interview Sunday that Democrats are will “get beaten so badly” and “never win another election” if they continue to embrace the anti-ICE mantra. Yet even in some of Texas’ reddest districts, Democrats are not shying away from at least having a conversation about eliminating the agency.

“I think conservatives and liberals alike can all agree on the fact that ICE has gotten quite out of hand,” said Fagan, who believes that, at a minimum, ICE’s Enforcement and Removal Operations division needs to go. “I think it is a radical idea, but I think the way they’re behaving is radical as well.”

In an interview, Bell said the “hardworking men and women of ICE are working hard to keep people safe, but I think its function is being misused” by Republicans. At the very least, she added, ICE should more narrowly refocus its mission on targeting violent criminals “instead of what we’re doing right now, and that is bringing oppression to minorities and people of color at the border.”