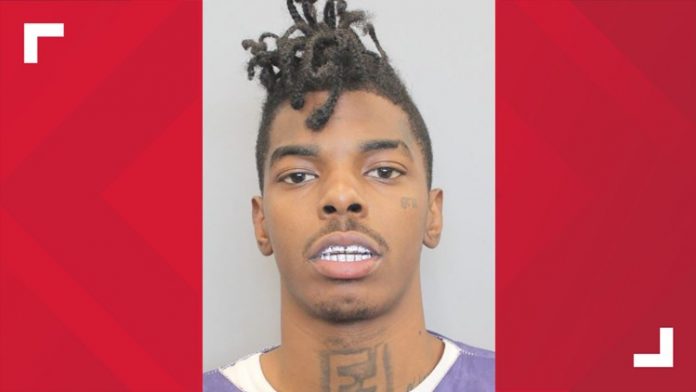 Tavores Henderson has a violet criminal arrest record that includes multiple domestic violence and weapons charges, along with a previous charge of running from the police.

Henderson is accused in connection with the death of Nassau Bay Police Sgt. Kaila Sullivan, 43, during a traffic stop Tuesday night. At the time, officers were in the process of arresting him for an open domestic violence warrant.

But that’s just one case in a criminal history that spans three counties. On Instagram, SoundCloud and YouTube, Henderson uses the name The Real Killah Dre and has a long discography. His music videos show him brandishing guns. In his songs and on Instagram he openly speaks about his run-ins with the law.

In one video he shows himself leaving the Harris County Jail and flaunts all the bails he was able to post.

“Y’all thought the kid wasn’t coming home. Over three counties … over three (expletive) bonds … over three cases,” he said before fanning out his remaining cash.

Suspected cop killer Tavores Henderson goes by “therealkillahdre” on Instagram. In this video, he brags about having plenty of cash to bond out of jail multiple times. If you know where he is, please, call CrimeStoppers at 713-222-TIPS. #KHOU11 Investigates692:37 PM – Dec 11, 2019Twitter Ads info and privacy113 people are talking about this

Those three counties were Galveston, Harris and Montgomery counties.

In both Montgomery and Galveston counties, he was arrested for theft and accused of stealing tools from Home Depot. In Montgomery County, when an officer tried to arrest him he allegedly fled from an officer in his vehicle, according to court records.

Henderson also was arrested in February in Harris County after another allegation of domestic violence. After visiting with his son while the child’s mother ran errands, he allegedly ran outside and told her, “Open the door or I’ll shoot you,” and pointed a firearm at her.

The woman said he previously threatened her with guns, so she let him into the vehicle. He allegedly choked her after she refused to park the vehicle and threatened to “knock all her teeth out of her mouth.”

He allegedly assaulted the same women three days ago.

The domestic violence warrant that officers said likely began the process of Henderson’s arrest on Tuesday night, stems from an incident on Sunday when Henderson confronted his ex-girlfriend and her coworker and accused them of being in a relationship.

The two were attending a work function when Henderson arrived unannounced and allegedly threatened to fight the coworker. When his ex-girlfriend tried to leave, Henderson allegedly got out of his vehicle, picked her up and put him in his vehicle, leaving scratches on her face.

He drove for several miles before allegedly letting her go because she told him her mom and police knew where he was. The ex-girlfriend was given a protection order in the case.

His criminal history also includes drug and weapons charges in Fort Bend County in 2016. A Missouri City Police Department spokesman said Henderson was a juvenile at the time. Court records show the charges were dismissed.