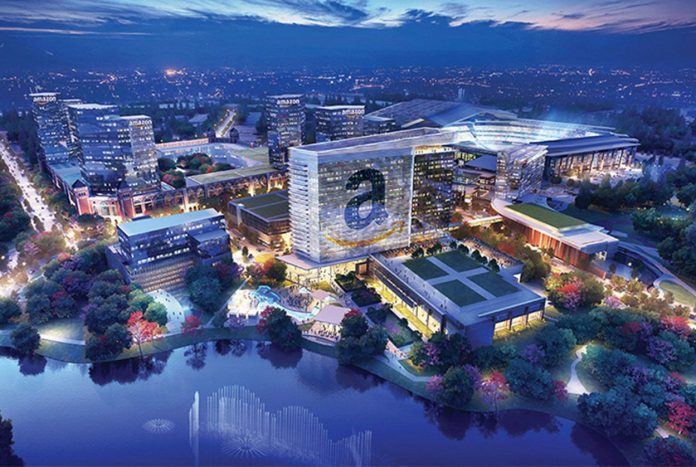 The city of Arlington offered Amazon $921 million in “performance-based incentives” as part of its bid to host the tech giant’s second headquarters, according to details of the bid released by the city Tuesday morning.

That figure — along with some of the other statistics the city released Tuesday morning after announcing it was “no longer moving forward in the selection process” — represents some of the most detailed information publicly available about any Texas city’s bid for the project, shedding light on exactly what some cities are willing to pay and what they expect to get in return. Amazon has said the project will generate as much as $5 billion in capital investment and bring as many as 50,000 jobs to the host city.

The Austin and Dallas regions — the Dallas bid included individual proposals from more than two dozen North Texas cities, apparently including Arlington — were named in January among the 20 finalists for the project, whittled down from an original pool of more than 200. Arlington officials reportedly learnedabout two weeks ago that it had been eliminated from the competition; other sites in the area remain in contention.

The $921 million figure does not seem to include any financial incentives the state would offer Amazon — a figure many experts anticipated would be the bigger portion of the packages offered by Texas cities. Gov. Greg Abbott, a Republican, has said he will not play favorites between the Texas cities under consideration. The state is likely to offer a grant through the Texas Enterprise Fund, a several hundred million dollar pot of “deal-closing” money the governor may draw from to attract businesses deciding between Texas and other states. The largest grant from that fund to date was $50 million from Gov. Rick Perry.

Documents related to the city of Houston’s bid — which did not advance to the group of 20 finalists — showed Houston was prepared to offer $268 million in incentives, a figure that also included the state’s contribution.

Arlington projected that over 10 years, the project could bring 96,000-plus permanent jobs, almost $50 billion in salaries and wages and almost $4 billion in taxable sales. That job number is nearly twice the figure Amazon has put forth, meaning the city between Dallas and Fort Worth is likely including in its count the service jobs that would be created to support the influx of new employees to the city.

Arlington said it hosted Amazon for an on-site visit as “one of the very select finalists in North Texas” asked to make an in-person pitch. That could suggest that Amazon has narrowed down the dozens of sites offered in the North Texas region. Amazon has already visited all 20 finalists across North America.

Arlington offered Amazon space at the site of Globe Life Park, the current home of the Texas Rangers baseball team that will clear out once the team moves across the street. The site Arlington proposed is larger than 200 acres, with 1.7 million square feet of building space available. It highlighted easy highway access as well as proximity to the Dallas-Fort Worth International Airport, one of the country’s busiest. And it touted a future high speed rail station it said would be close to the campus.

It’s worth noting, however, that Arlington — and other cities in the North Texas region — are known for being more aggressive in this kind of competition than other Texas cities, particularly Austin. Arlington has spent hundreds of millions of dollars on projects like the new Texas Rangers’ stadium. It’s very likely that the Arlington bid is more generous in incentives than those put forward by many other cities.