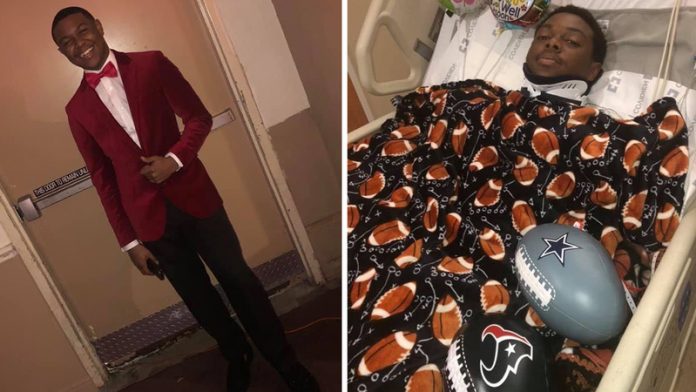 The mother of a Fort Bend County teen who suffered a spinal cord injury during a high school football game two weeks ago is asking for prayers.

Jordyn Hawkins, 15, is in “good spirits,” according to his mother Deandrea Wade.

On Sept. 12 during a junior varsity game at Austin High School, she says he tackled the quarterback and did not get up.

“Just in the blink of an eye, literally, in front of my eyes, our lives have changed,” Wade said during an interview outside TIRR Memorial Hermann, a rehabilitation center in the Texas Medical Center.

Wade says her son, a sophomore at Austin High, is paralyzed from the shoulders down, but has some feeling in his arm and legs. He still has his big smile and gratitude for all the support.

“Hi everyone. I’m Jordyn. I want to thank everyone for their well wishes and support,” he said in a video he recorded from his hospital bed Thursday night and provided to ABC13. “Please continue to pray for my full recovery as I prepare to walk out of here.”

After a week in the Intensive Care Unit at Memorial Hermann, he was moved to TIRR and is now in the gym for rehabilitation every day. His mother is hopeful.

“It’s difficult, but with my faith I believe that God is going to bring us through,” Wade said. “God has already given us so many victories. Everyday. We have a victory everyday, so that’s what I’m standing on. My belief in God.”

She is asking friends, teammates, classmates and even strangers to come out Friday night from 6 p.m.-8 p.m. to the field at Austin High School, 3434 Pheasant Creek Drive in Sugar Land, for a prayer rally.

It’s the same field where Jordyn was injured. He is determined to walk again. His mother says he cannot do it alone.

“My biggest thing is for people to pray with us,” Wade said. “I believe God is going to provide everything we need, but we need prayers.”

Jordyn’s parents have also set up a GoFundMe to raise money for their son’s extended care.