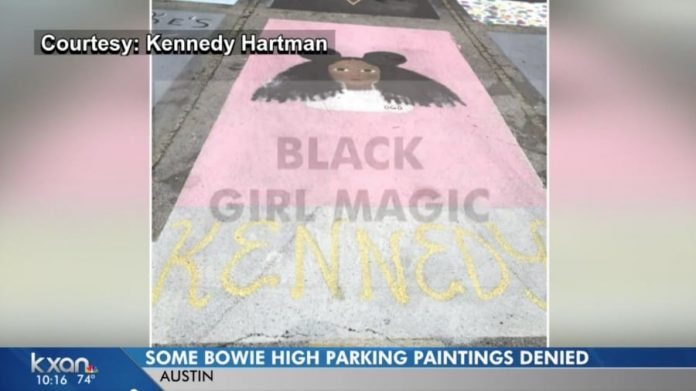 Seniors at a high school in Austin, Texas are disappointed after they say they were asked to change or flat out denied the designs they wanted to paint on their reserved parking spots.

According to station KXAN, the parking spots are supposed to be a perk for students with good attendance and seniors can pay $50 to have them customized. However, students say the so-called perk has felt like more like a punishment.

One student who asked to remain unnamed said Principal Mark Robinson told her to make it clear that her drawing of the Taj Mahal wasn’t a mosque, suggesting that showing pride for the Muslim faith wasn’t acceptable. The student, who’s from India, said her design was approved by school staff well before school started, yet Robinson only recently told her it wasn’t allowed.

Fellow senior Kennedy Hartman said she submitted a drawing meant to be a portrait of herself, depicting an African-American girl wearing a t-shirt with the words “Black Girl Magic” on the front. School leaders denied it, however, saying they weren’t comfortable with the phrase. They only approved the design after Hartman agreed to remove it.

Meanwhile, the district saw it fit to approve a “Blue Lives Matter” flag and allowed other students to paint Bible verses in their parking spots. Student Brooke Wilkerson wrote Romans 12:21 in her spot, which reads “Do not be overcome by evil, but overcome evil with good.”

“As a Christian student I can put my Bible verse, but as someone who believes in Allah and worships Islam, the religion, they should be able to put whatever they want on their parking spot,” she said.

The district has denied the students’ discrimination claims and noted that “all parking spot designs are subject to approval and cannot include religious symbolism.” The school’s guidelines and procedures, however, don’t state what is or isn’t allowed and only says the painting should “reflect your interests, shows your school spirit or is simply an interesting or creative design.”

The school has also disputed Hartman’s claim, saying it has no record of a “Black Girl Magic” design being denied.