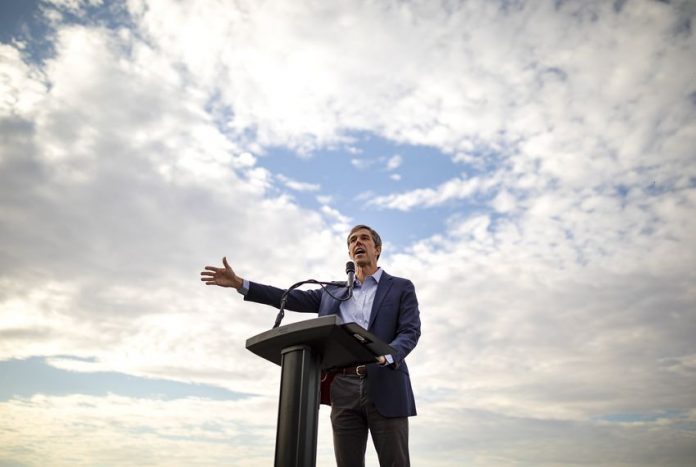 The photo line for Beto O’Rourke here Saturday afternoon quickly turned into something of a reunion.

“Hey, I know who you are!” a characteristically sweat-drenched O’Rourke told one supporter. After talking to another, O’Rourke yelled out to an aide: “Hey, someone who worked on the campaign wants to be plugged in again!”

The vibe was similar a day later in Plano, where O’Rourke rallied in front of signs reading, “Welcome to Beto Country,” serving up nostalgia from his near-miss loss to U.S. Sen. Ted Cruz last year. He said the Senate race was the “only reason” he got to run for president, touting the support he built in Collin, Denton, Tarrant and Dallas counties before getting drowned out by cheers.

“Hold on, I’ve got 250 other counties I want to mention,” he added cheekily, a nod to his all-county tour in that race.

O’Rourke will need the voters in these places, particularly Katy and Plano, if he wants to make good on a central tenet of his White House pitch — that he isuniquely positioned to not only win the Texas primary, but also to deliver the state for Democrats in the general election for the first time in over four decades. While he’s polling low elsewhere, O’Rourke has remained near the top of primary polls in Texas, along with national frontrunner Joe Biden, though he has encountered new headwinds with two recent surveys showing Elizabeth Warren overtaking him for second place.

O’Rourke’s weekend swing through the Houston and Dallas suburbs took him to historically Republican counties that he dramatically swung last year — places that illustrate the upper hand he believes he has even as his statewide standing slips.

“As was just reinforced today, no one has the network like the network that we helped to build in 2018, and that still exists in 2019 going into 2020,” O’Rourke told reporters after the Katy event. “So I believe that as we engage this network … in places like Fort Bend, but also in places like Amarillo or Longview, we’re going to be able to produce the majority that wins the delegates and also, importantly against Donald Trump, wins the [state’s] 38 electoral votes.”

O’Rourke’s more immediate reason for being in Katy — part of which is in Fort Bend County — was to campaign for Eliz Markowitz, the sole Democratic candidate in a November special election for a state House seat that the party is aiming to flip. A win would give Texas Democrats a burst of momentum as they work to capture the House majority next year, and O’Rourke is easily the highest-profile Democrat to get involved in the race yet.

O’Rourke went door-knocking Saturday with Markowitz, a 2018 nominee for the State Board of Education, and then held a rally with her outside a Katy brewery.