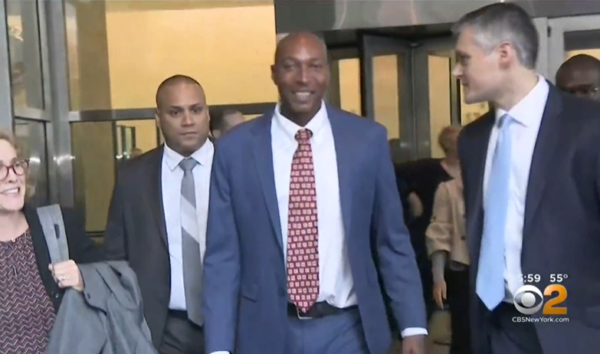 A Brooklyn man who spent 26 years in prison on a false murder conviction walked out of court a free man Thursday after losing nearly three decades of his life for a crime he didn’t commit.

Carlos Weeks, 46, had his conviction vacated after a key witness in the case admitted she’d lied, the New York Post reported. Brooklyn District Attorney Eric Gonzalez moved to exonerate Weeks after a review of the case found the main witnesses, two sisters, were less than credible.

“I just want to say I’m feeling good and happy to be out,” Weeks said upon being released, adding: “I hope Gonzalez continues with Conviction Review Unit work because there’s a lot of guys up in there that need it.”

In 1995, Weeks was convicted of murder and first-degree assault after he was accused of gunning down Frank Davis and injuring a 10-year-old girl ins a shooting outside the Tompkins Houses in Bedford-Stuyvesant.

He was sentenced to 27 years to life in prison.

At the time, two sisters testified they were in their 12th-floor apartment when they saw Weeks fatally shoot Davis, 21. One of the sisters, Lorraine Taylor, has since recanted her statement and claims she never witnessed what had actually transpired.

Through tears, she told Conviction Review Unit investigators: “There was so much pressure” to testify, Gonzalez said.

Her sister, Carmella Taylor, has said she doesn’t remember testifying about the incident at all, nor did she recall telling authorities that Weeks was the gunman.

Investigators found their claims “implausible” and determined the siblings had fibbed in hopes of striking a deal for a family member in an unrelated case, according to the DA. Despite this, Weeks said he feels no ill will toward the people who put him behind bars.

“I’m great,” he said, embracing his lawyers as he exited the Brooklyn Supreme Court this week.

The New York man spent most of his years in jail fighting to prove his innocence. It was the effort of his lawyers, who took up his case in 2015, and the Legal Aid Society that helped clear his name.

“This is a happy day for Carlos and his family — a long time in coming,” said Elizabeth Felber, an attorney with the Legal Aid Society.  “But we have other clients with matters pending before the CRU.”

“We urge that office to investigate those matters promptly so that other wrongfully convicted individuals can experience the vindication that Carlos has experienced today,” she added.

Gonzalez also apologized to Weeks for his incarceration and wished the newly-freed man a “heartfelt good luck.”

“Today we continue to see why the search for the truth must continue after a case is considered closed and the conviction has been received and someone has been sent to jail,” he told reporters outside the courthouse Friday. “We have to make sure we continue to root out these miscarriages of justice.”