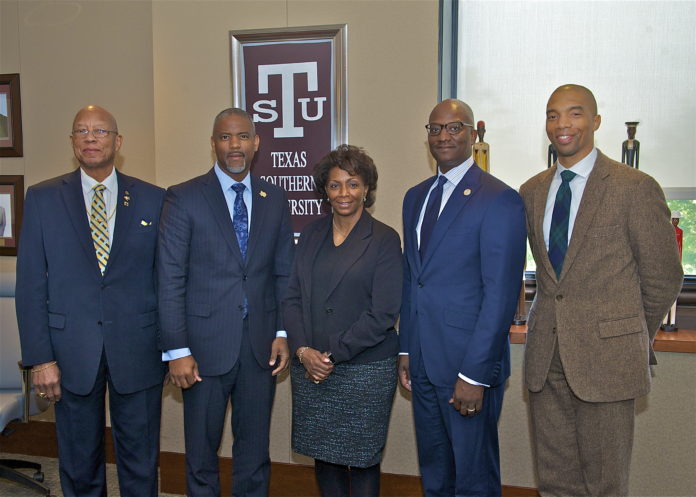 Defender:  Given the possible budget cuts proposed by the State Legislature, how will TSU be affected and where will you have to trim costs?

Lane: When I hit the ground back in the summer when I came on board I instituted a hold-the-line budget. What that meant was that we knew going into session that there could be some potential cuts. Lo and behold about two months later the governor sent out a note with the lieutenant governor and speaker that said all state agencies – not just TSU – had to reduce their budgets by 4 percent –for us that equated to $1.6 million.

We immediately went into the hold-the-line budget and a hiring freeze. We started the hiring freeze even before the governor sent his note out a couple of months ago. We were able to build not only lap salaries, which is an amount where you’re saving money based on those positions being unfilled. Then we tapped into our institutional advancement, which is about $6 million and looked at what had not been spent in the previous year.

We didn’t anyone to feel the cut if it was coming because we knew we had at least $1.6 (million) that nobody used. So going forward even if on Tuesday that 4 percent is still there and it’s a $1.6 million cut it won’t affect us at all because it’s just dollars that we had budgeted for and was sitting there almost like a reserve. We knew and were thinking ahead if we get cut $1.6 (million) what does it look like? If we cut $5 million or $6 million, which is what the Senate was coming in, and what would we have to reduce?

So we started that work before the session in January. We started probably a month after I came here because we knew the session would bring some tough times, but for us it’s not going to impact us if everything holds the way it’s supposed to hold by next Tuesday.

Defender: When you took the reins of TSU you terminated a number of people and did a lot of shifting and changing. Some people didn’t understand what was going on. How have these changes helped you accomplish your goals and what do you think has resulted because of those changes?

Lane: I never terminated anyone. The changes that have been made were folks who have resigned. When you come in and you assess – I promised the board that I wouldn’t come in terminating people, that I would give them an opportunity to explain their role within the university and then begin to assess that role and find out if this was the best fit. In that process when I came in we actually had about five or six interim deans who had already been interim before I got here. Most of the folks who are here now are applying for those full-time dean positions and all those searches are taking place as we speak.

Any changes that I have talked about have been changes that have not been based on whether they are personal decisions or whether you like someone. They’ve been made based on the data or based on the students and that’s how I think you can neutralize some of these discussions. If you go to the data if you look at the return on investment that you’re getting or not getting and then you look at the planning and what skill sets are needed to get there I think what people will know from us is that we’re going to be focused on leaders who come in who are very competent and understand the accountability role that’s in play, including myself, where you’re looking at those targeted benchmarks of what we want to do to get better and how we’re working toward doing that and being accountable to it.

We can’t just settle for a 4 percent graduation rate or 18 percent six-year graduation rate. We have to do some things that are going to shift not only the culture but that will actually equate to more success for our students.

Defender: How would you grade the financial status of TSU and why and what efforts are underway to increase TSU’s fundraising within the Black community.

Lane: The finance piece is one of our top five priorities, which are student success, academic programming, culture, partnerships and finances. Finances is always something we have to focus on – being good stewards of taxpayer dollars, being good stewards of donor dollars, is extremely important. When I arrived we instituted a hold-the-line budget and from that looking at each area across the university in terms of spending trends and what they were spending their dollars on whatever was left on the table or if there were some things we wanted to reallocate we were able to put back several millions of dollars actually in our reserve.

Most HBCUs always function with no reserve. Our reserve when we started the academic year was at $17 million because we pulled money back and said if we’re going spend it let’s justify it before it’s spent. Let’s not just spend for the sake of spending. We were able to do that. This budget we’re preparing now has the same philosophical model – how do we ensure that we operate with a reserve, that we have cash on hand and more than 30 days.

Our goal is always 100-plus day’s cash on hand so we can operate efficiently and effectively. That’s a big piece and I think for us what we’re supposed to be, very financially savvy and efficient.

The fundraising aspect, we just had a very successful gala and a lot of that was based on connecting in with the community whether that be African-American, Hispanic, Caucasian, Asian-American – anyone who had a passion for TSU and wanted us to succeed we asked those individuals to contribute to our success.

Most importantly when I say our, I’m talking about our students. We raised almost a million dollars for our first inaugural gala. Most important we did a lot of “friend raising.” In this community when I got here I always said we don’t want to be located in a community we want to be in the community. There’s a big difference.

Just being physically here is not enough. I went over to Yates a couple of months back and they said, “We don’t get anybody to come over here, we’re glad you showed up.” That was sad to hear. We have some of the lowest-performing high schools, middle schools within a three to five-mile radius and when I go there they say, “Well TSU never did anything.”

If we’re going to be that special purpose institution for urban programming that we designated at in the 63rd legislative session in 1973, Granville Sawyer.