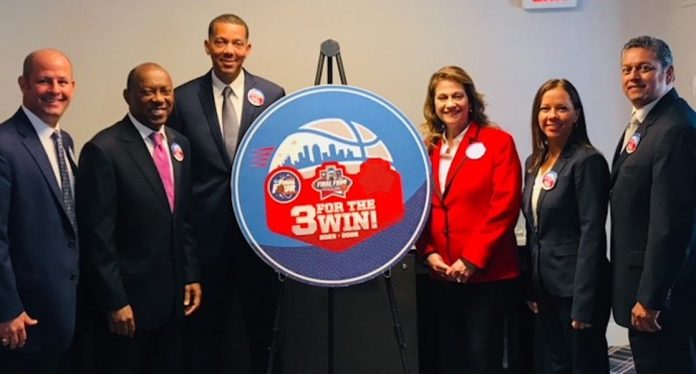 While on a busy trade and investment mission to grow business and cultural ties in South America, Mayor Sylvester Turner took time today to celebrate an announcement by the NCAA® that Houston has won a bid to host the Men’s Basketball Final Four® in 2023 and to thank everyone who worked hard to make it happen.

Last week, the mayor travelled to Boston with representatives from the Harris County-Houston Sports Authority, Visit Houston, Texas Southern University and others to make a final presentation to the NCAA site selection committee.

“Returning the Final Four to Houston in 2023 will be a slam dunk. I’m overjoyed that the NCAA recognized this fact,’’ Mayor Turner said. “From our restaurants, to our convention center, hotels, and retail spaces, Houston is poised to provide a total fan experience. The 2016 Final Four in Houston was a huge success. We will also host an NCAA Men’s Regional in 2020. So when the Final Four returns, we will be seasoned veterans in hosting the thrilling Men’s Division I college basketball championship competition.’’

Houston realized approximately $250 million in economic impact from the 2016 event when Villanova beat North Carolina at the buzzer for the title. The 2016 championship game ranks third on the all-time list with 74,340. At the time, it was the second-highest total in history.

HCHSA CEO Janis Burke said this third NCAA® Men’s Final Four® will enhance Houston’s sports legacy both on and off the court.

“Houston’s on a roll,’’ Burke said. “We are part of the winning 2026 World Cup bid, we landed 2024 College Football Playoffs and we just successfully hosted not only the 2016 Final Four, but also Super Bowl LI. This proves we know how to host multiple big events in succession. But this is more than just an event. It’s an event that leaves a lasting impact on the city. We were able to implement and enhance programs across the city during the 2016 event.”