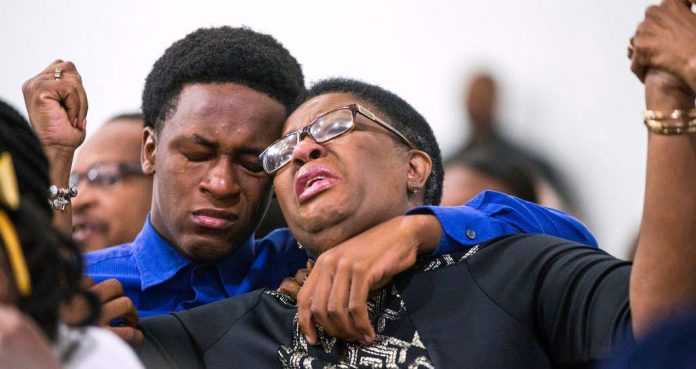 As if the bar of human decency couldn’t get any lower, a conservative is disrespecting the family of Botham Jean — the 26-year-old who was gunned down in his own apartment by Amber Guyger.

S. Lee Merritt, one of the attorneys representing the Jean family, posted a clip of the vile Chris Krok from WBAP 820 AM in Texas attacking Botham Jean’s mother Allison. Merritt called Krok his words “dangerous, defamatory and uniquely evil.”

Krok spat about Allison Jean, “She is filled with bitterness and hatred and she is going to cause a riot in Dallas. Botham Jean’s mother is consumed with hate.” He also called her a liar and alleges “she wants to make money off of this for some reason.” He also added, “God took Botham away for some reason. God chose to use Amber Guyger to do that.”

Guyger claimed on Sept. 6, she implausibly mistook his apartment for her own and, after ordering Jean not to move, shot him twice before realizing the error of her ways. Her story was met with doubt because of a number of factors, especially her assertion that Jean’s door was ajar. Videos posted on social media by neighbors appeared to show that apartment doors in the building shut automatically, which seemed to indicate that Guyger was lying.

In addition to the inconsistencies in her alibis, which have changed several times, Dallas police, of which Guyger was a member for five years before being fired, appeared to be helping to cover up the shooting for their colleague. The department was accused of allowing Guyger enough time to scrub her social media accounts and get her story straight before turning herself in three days after killing Jean. It also gave Guyger enough time to move out of her apartment, which was never searched by police despite five warrants allowing them to do so.

On Dec. 1, a grand jury finally indicted the former police officer with murder for killing Jean. She was booked into the Mesquite Jail and released way too quickly on a $200,000 bond.

The trial was supposed to begin Aug. 12 but now it has been delayed because her lawyers need to “adequately prepare.” Now, the trial has been pushed to Sept. 23 — well past the year-mark since Jean’s death. Th

Murder charges against a police officer are notoriously hard to prosecute. There are roughly 1,000 police shootings every year in the United States, but officers seldom face justice. According to CNN, only 80 cops were arrested on murder or manslaughter charges for on-duty shootings between 2005 and April 2017. However, only 35 percent of those arrests led to convictions in that 12-year period.