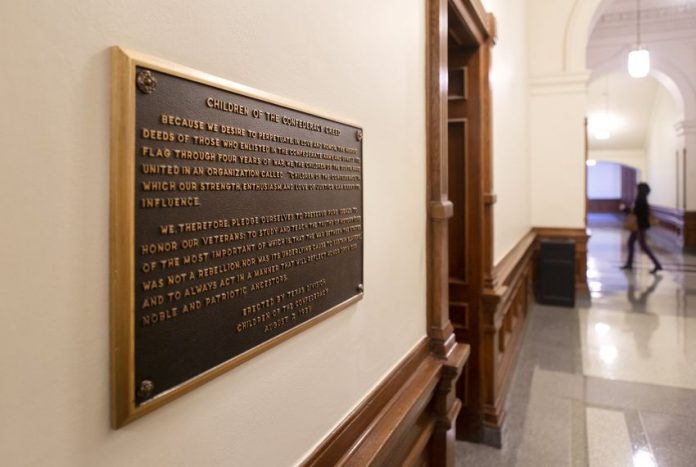 A Dallas man angry over the removal of Confederate monuments has pledged to call 100,000 Texas households in the next few weeks urging them to contact their elected officials.

Dallas businessman and GOP donor Christopher Ekstrom said the Conservative Response Team, a politically active nonprofit he leads, plans to make the robocalls before Jan. 12. The calls will urge Republicans to call Rep. Dennis Bonnen, the Angleton Republican assumed to become the next speaker of the Texas House, who recently joined Gov. Greg Abbott in backing the removal of a controversial Confederate plaque from the state Capitol.

“This is part of a so-called intersectionalist attempt to whitewash and, I think as Condoleezza Rice said, sanitize our history,” Ekstrom told The Dallas Morning News on Tuesday. “It’s a dumb argument.”

Ekstrom said his group has already made 8,000 calls in Bonnen’s district on the issue. That could not immediately be verified, and he declined to say who was funding the campaign. Abbott’s office did not responded to requests for comment. A representative with Bonnen’s office confirmed the office had received a couple of hundred calls.

The plaque in question hangs on a back wall of the rotunda in the state Capitol building. Erected in 1959, it features the “Children of the Confederacy creed,” which says slavery was not the underlying cause of the Civil War. Democrats have long asked for it to be taken down, but these calls did not gain momentum until Rep. Eric Johnson of Dallas began a formal process to remove the plaque last year.

Abbott first publicly backed the removal in November and has set a meeting of the State Preservation Board’s governing members in January. They are expected to discuss who should decide the plaque’s future. The attorney general has said the Capitol curator, state Legislature or preservation board can decide to relocate the marker.

This isn’t the first time the Conservative Response Team has opposed removing a Confederate landmark. Last year, Ekstrom’s group released radio ads against the removal of a Robert E. Lee statue from a park in Oak Lawn, and the group has also gotten involved in Confederate statue debates in Florida, South Carolina and Virginia.

According to the group’s 2016 IRS filings, the Conservative Response Team is based in Kansas City, Mo. As a 501(c)4, the so-called dark money nonprofit can be politically active as long as that’s not its primary purpose. It does not have to disclose its donors to the IRS.

Ekstrom, who has given $25,000 to Texas politicians in the last three years, described the men calling for the removal of the markers as “a handful of nuts” and said the demolition of the Confederate War Memorial near Dallas City Hall “would be the equivalent of ISIS blowing up Buddhist statues.”

He then threatened to mobilize conservatives to unseat any Republican who backs the removal of the Capitol plaque or other historical landmarks like it.