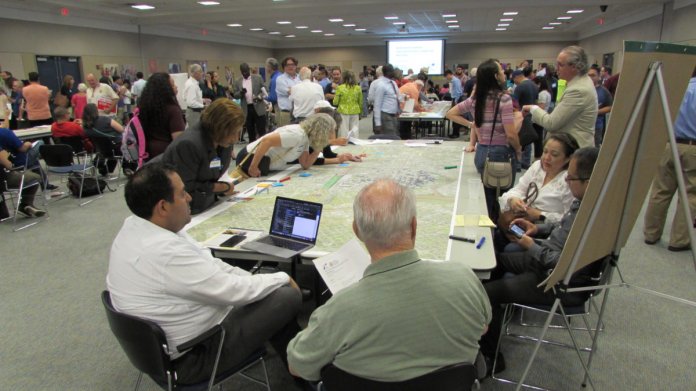 TxDOT is currently carrying out environmental studies for a $7 billion project that would widen I-45 from Beltway 8 North to downtown Houston.

Planners say the work is needed to address a growing population, but some opponents contend it will only benefit people living in the suburbs, while causing air quality and flooding issues for neighborhoods inside the Beltway. They also worry some residents will wind up losing their homes and businesses.

Lindale Park resident Hector Coronado was one of the people at a City of Houston informational meeting Thursday night.

“We think it’s wasted dollars,” Coronado said of the project. “We think it’s going to affect the inner-city communities by splitting us up more when we’re trying to be together.”

Along with adding two-way lanes for buses and carpoolers, the project includes a massive redesign near downtown where I-45 would be rerouted along I-69 on the east side.

TxDOT District Engineer Quincy Allen said a final decision on the project is expected next year. He added that the downtown portion is already funded and they could break ground as early as 2021.

“We remain committed to our customer base here,” said Allen. “We’ve got tremendous respect for their needs and concerns. We’re listening very carefully to things that may have been missed or may need to be looked at again.”

Allen said residents can still comment on the project, and the City of Houston is also planning a series of public forums this summer to gather feedback. But many of those attending Thursday’s meeting say they were disappointed the city didn’t have a question-and-answer session.

In a series of recommendations, the group is asking TxDOT to install air monitors at schools, parks, and playgrounds within 500 feet of the highway. They’re also calling on the state transportation agency to comply with Harris County and City of Houston design standards for 500-year flood events instead of 100-year events.

Another informational meeting on the project will be held June 26 at the Acres Homes Multi-Service Center from 6:00 to 8:00 PM.