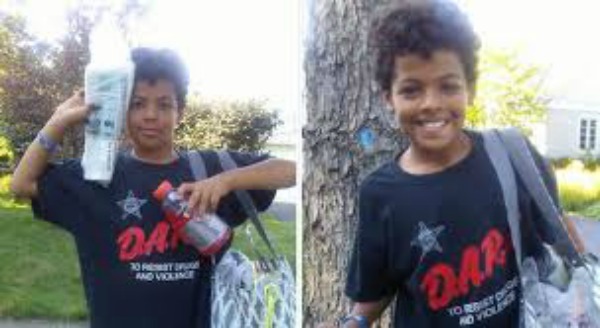 he cycle of people calling the cops on African Americans seems never-ending. A 12-year-old boy was targeted while delivering newspapers on his first day covering a route in Arlington, Ohio.

The boy’s mother, Brandie Sharp, expressed how truly sad and disheartening it is that her young son couldn’t even work outdoors without someone summoning police to the scene. She touched on the evils of racial profiling in a Facebook message posted Friday.

…Sad I can’t even teach my son the value of working without someone whispering,” Sharp said, who was with her young sons Micah and Uriah, “and looking at us out the side of their eye perhaps because we DON’T ‘look like a person that belongs in their neighborhood.’”

The experience was very upsetting as Sharp and her children were pulled over and questioned by Upper Arlington police, NBC affiliate WCMH-TV reported. They were treated like intruders in an incident that left the mother “disgusted and disturbed that this kind of behavior still exists.”

“And he was like, what are you doing here…are you soliciting? ”Sharp, referring to the police officer who stopped her, said to WCMH, adding that she first thought they were being racially profiled before she found out a resident called the police on them. “I said, no sir I’m not soliciting, I’m delivering papers. He said, what papers? I showed him the paper. He said, Oh really, and sat there for a minute and then pulled off.”

The unidentified person who called police reported that someone had walked up on a porch empty-handed and left with an item in their hand, Upper Arlington officer Bryan McKean said. Some bags of newspapers and ads had been delivered to the wrong houses, and Sharp and her boys were going back to retrieve them, she said. How the boys could have been deemed suspicious is crazy when they did nothing wrong, she also said.

Unsurprisingly, police disputed Sharp’s statements that race played a part in the incident. Police had found that no wrongdoing had been done in this incident, but other encounters between cops and people of color have ended in brutality and fatal shootings. Thankfully, Sharp and her boys were okay but the incident serves as an example of how damaging and painful racial profiling can be for African Americans.