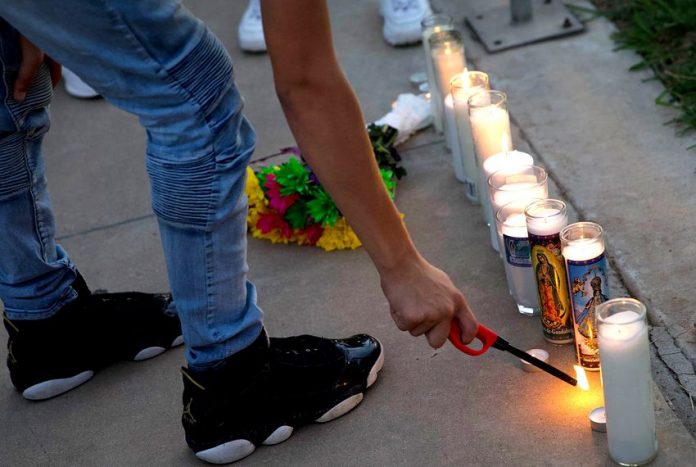 Democrats in the Texas House are calling on Gov. Greg Abbott to convene a special legislative session to address gun violence — a move designed to place even more pressure on the state’s top GOP official to act in the wake of two deadly mass shootings just weeks apart.

A letter to Abbott was delivered Wednesday morning, hours before the House Democratic Caucus hosted five news conferences across the state to discuss “protecting Texans from gun violence.” The letter, which also included several gun-related legislative proposals, was signed by 63 of the 66 members in the caucus.

The caucus requested Abbott include issues such as “closing the background check loopholes” and “banning the sale of high-capacity magazines” in a special session agenda, along with “enacting extreme risk protective order laws and closing existing loopholes in current protective order laws,” “limiting the open carry of certain semi-automatic long guns” and “requiring stolen guns be reported to law enforcement.”

The request comes days after a gunman killed seven people and injured 22 others while on a rampage in Odessa and Midland. That shooting happened four weeks after a massacre in El Paso left 22 dead and more than two dozen wounded.

The Legislature does not convene again until 2021. Abbott, who has the sole authority to call both chambers back to the Capitol before then, tweeted Wednesday afternoon that he planned to announce “legislative considerations next week & executive action this week.” He added: “Legislators can be part of the process or part of the problem.”

Democrats said Wednesday that waiting another year and a half to address gun violence in the state will endanger Texans.

“This is the kind of thing our constituents are telling us they want us to tackle, and they want us to tackle it now,” state Rep. Donna Howard, D-Austin, said at a news conference at the Texas Capitol. “We should not sacrifice any more Texas lives simply to accommodate a legislative calendar.”

On top of that, Howard said, the next session will be bogged down with fights over redistricting, further polarizing the state and reducing the chance for consensus on gun safety legislation.

As the news conferences played out Wednesday, Abbott’s office responded to the party’s call for a special session, likening the move to a “helter skelter approach that hastily calls for perfunctory votes that divide legislators along party lines.

“Governor Abbott made clear in Odessa that all strategies are on the table that will lead to laws that make Texans safer,” Abbott’s spokesperson said in a statement. “The Democrats who are part of today’s partisan pitch can be part of the bi-partisan legislative process announced yesterday that is geared toward achieving real solutions, or they can be part of politics as usual that will accomplish nothing. Legislating on tough issues is hard and takes time. If Democrats really want to change the law, they need to stop talking to cameras and start talking to colleagues in the Capitol to reach consensus.”

Later Wednesday, during the Democrats’ press conference in El Paso, members there pushed back on the governor’s assertion that Democrats needed to start speaking with colleagues instead of posturing for the cameras.

State Rep. Joe Moody, the House speaker pro tempore, said the group has been reaching across the aisle on this issue since the Aug. 3 shooting.

“We didn’t ask for cameras to come to El Paso on Aug. 3,”Moody said. “But that’s what happened to us. Our community voice needed to be heard and needed to heal — but we need action.”

Moody, who on Wednesday was tapped by House Speaker Dennis Bonnen, R-Angleton, to serve on a select committee to study gun violence and prevention, said the El Paso delegation has been in conversation with Abbott since the shooting happened.

“We appreciate the attention that he’s given to our community,” Moody said. “To bring people together you have to hear what they say. That’s how you get people to come to the middle.”

As Democrats have repeatedly urged Abbott to call a special session on the matter, the governor — along with other GOP leaders — have formed various entities to help explore long-term responses. After the El Paso shooting, Abbott assembled the Domestic Terrorism Task Force and the Texas Safety Commission. And on Tuesday, Bonnen and Lt. Gov. Dan Patrick announced they had formed interim select committees to study mass violence prevention and community safety.

Bonnen on Wednesday announced the 13 House members who will serve on the select committee and directed the newly-formed panel to begin studying an array of issues related to gun violence and prevention, such as evaluating “options for strengthening enforcement measures for current laws that prevent the transfer of firearms to felons and other persons prohibited by current law from possessing firearms” and considering “current protocols and extreme risk indicators used to identify potential threats.”