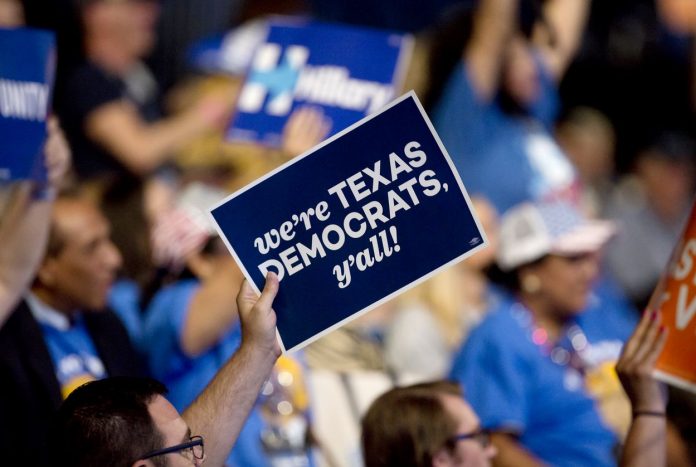 For the first time in years, Republicans and Democrats are acknowledging that the GOP could lose its grip on the Texas House — a turning point that would mark the state’s biggest political shakeup since the chamber last flipped nearly two decades ago.

With the 2020 ballot all but set, both parties are readying their candidates for the 150 state House races, with roughly 30 seats seen as competitive.

As recently as 2017, House Republicans relished in a 95-member majority. But now, Democrats, bolstered by their 12-seat pick-up last year, are effectively only nine away from gaining control of the chamber — and having a larger say in the 2021 redistricting process.

Such a prospect has prompted newfound attention — and, in some cases, alarm — in a state that’s long been considered far out of reach for Democrats. And it’s created an awareness among Republicans, who have comfortably controlled virtually every lever of state government in Texas, that an updated — if not entirely new — playbook is needed.

Democrats still have their work cut out for them. The last time they controlled the House was 2001. In addition to holding onto the 12 seats the party flipped last year, Democrats would need to pick up the additional nine — and this cycle, the GOP says it’s more prepared for the threat than it was in 2018.

Earlier this week, Republican Gov. Greg Abbott told reporters that he was confident all House Republicans will win reelection — and even grow their numbers — “because people are hungry for the results that Republicans have delivered” in Austin.

“One thing that we have found is that when voters realize all the great success we had this past session — of doing things like cutting property taxes, building roads, making communities safer — things like that — the voters respond very positively to that,” Abbott said after a speech Thursday in Dallas. “So all that the House members have to do is run on their record. It’s a record that sells well with voters because it showed they tended to the needs of voters.”

The battlefield for the House is large. In addition to the 12 seats that Republicans are trying to reclaim from the 2018 midterm election, Democrats are targeting 22 Republican-held seats where Beto O’Rourke, the 2018 Democratic nominee for U.S. Senate, won or lost by single digits. In 17 of those seats, the Republican incumbents won by fewer than 10 percentage points. Of those 17 seats, there are nine where both O’Rourke won and the incumbent won by single digits — those could be considered Democrats’ highest priorities.

Both parties are again calling North Texas ground zero for several of the House races considered to be in play by both parties, with the Austin and Houston areas also featuring clusters of competitive seats.

Even before the 2020 elections, Democrats have a chance to pick up a seat in the late January special election runoff to fill the seat of former Rep. John Zerwas, R-Richmond. Democrats were already targeting him before he resigned this fall to take a job with the University of Texas System.

Democrat targets have even grown to include once-unthinkable places like House District 32, where state Rep. Todd Hunter, R-Corpus Christi, is facing his first challenger from either party since O’Rourke came within 5 points of winning the district.

The Democrat now running against Hunter, Eric Holguin, said the district has become more young and more diverse since the lines were drawn in 2011 — and last year brought into focus Democrats’ path to victory.

“In 2018, we were seeing such a seismic shift in our political landscape due to [President Donald] Trump already having been in office a couple years,” said Holguin, who ran for Congress last cycle in the area. “Now that we saw the results of what happened in 2018, we could build off from there. We know where the new bar is set at more locally, and we could take it from there instead of not knowing what would happen post-Trump being elected.”

Many of the competitive races are playing out in suburban areas that are changing demographically.

Republicans think their candidates can attract voters in those areas based on the pitch that the GOP is a “broad-based party” rooted in good governance and policies.

“The Republican Party [is not] not monochromatic,” said Steve Armbruster, chair of the Williamson County GOP, noting that the local party had recruited three Hispanic Republicans this cycle to challenge incumbent Democrats on the ballot. “The suburban districts are where the battleground is at, but the Republicans are ready for a fight.”

But changing demographics, said state Rep. Celia Israel, an Austin Democrat and the new chairwoman of the House Democratic Campaign Committee, “tell a progressive story” — and as the trend continues, “we’re electing more and more Democrats.”

Monday marked the last day for candidates to file to run for office. Both parties fielded candidates for all of the targeted seats, and in some battleground races primaries grew to include as many as five candidates.

The Texas GOP applauded its fundraising and candidate recruitment — and made the case again for how Republican leadership in the state has delivered results for Texans.

Democrats, for their part, hailed the number of candidates they fielded as proof that Texas is the “biggest battleground state in the country,” a common refrain from the party this cycle.

“Republicans see the writing on the wall, and they’re scared,” said Manny Garcia, the executive director of the Texas Democratic Party, in a statement after the filing period closed Monday. “Our Democratic candidates for Texas House are going to take us over the finish line.”