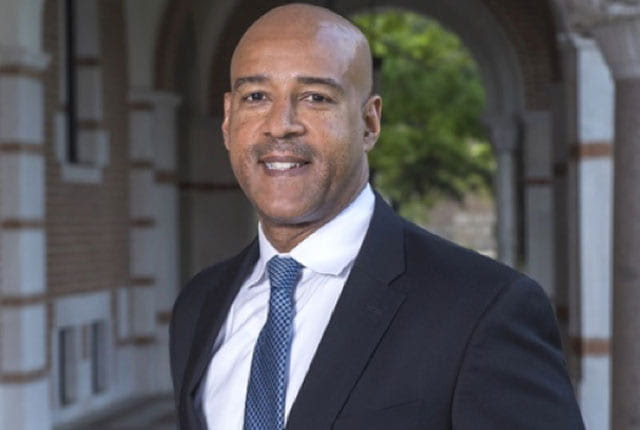 Reginald DesRoches, the dean of Rice University’s George R. Brown School of Engineering, has been named the university’s new provost.

With this appointment, DesRoches will assume one of the university’s most important leadership posts. Together with the deans and vice provosts, the provost’s office supports excellence in all of the university’s academic, research, scholarly and creative activities.

“I could not be more grateful and excited that Reggie has agreed to serve as our next provost,” Rice President David Leebron said. “He is an accomplished scholar and a proven academic leader. During his years as dean of engineering at Rice, he has demonstrated in numerous ways that he shares the high aspirations and values of the university. His commitment to excellence extends to every part of our endeavors.”

DesRoches has served as the William and Stephanie Sick Dean of Engineering since 2017, leading a school with nine departments, 140 faculty and 2,500 students. Effective July 1, he will assume the duties now fulfilled by interim Provost Seiichi Matsuda, Rice’s dean of graduate and postdoctoral studies, who succeeded Provost Marie Lynn Miranda.

“I am deeply honored and excited,” DesRoches said. “Serving as dean of engineering for the past 2 1/2 years has been among the most rewarding times in my career. It is an absolute privilege to serve as the next provost and I look forward to working with President Leebron, the faculty and staff to enhance the university’s stellar reputation.”

As dean, DesRoches led a comprehensive strategic planning process for the School of Engineering, expanded the engineering faculty by nearly 20% and strengthened collaborations with the Texas Medical Center. Under his leadership, the school launched a new minor in data science as well as the Center for Transforming Data to Knowledge, which provides students immersive learning opportunities working with companies and community organizations. DesRoches also established a Master of Computer Science online program and led several international initiatives in China and India to bolster research and recruiting efforts.

Born in Port-au-Prince, Haiti, and raised in the New York City borough Queens, DesRoches credits his love of science and math and his interest in “tinkering with things” with leading him to pursue a degree in mechanical engineering. As a student earning his doctorate at the University of California, Berkeley, he witnessed firsthand the structural damage wrought by the historic 1989 Loma Prieta earthquake in San Francisco.

“I became fascinated with studying structural engineering and how we could design structures to perform better in earthquakes, and I ended up studying that for my master’s and Ph.D.,” he said.

DesRoches is a nationally recognized expert on earthquake resilience who has testified before U.S. House and Senate subcommittees. He has also participated in Washington, D.C., roundtables for media and congressional staffers on topics ranging from disaster preparedness to challenges for African American men in the STEM fields — science, technology, engineering and mathematics.

DesRoches came to Rice from Georgia Tech in Atlanta, where he became an assistant professor in 1998. In 2002, he received the Presidential Early Career Award for Scientists and Engineers, the highest honor given to scientists and engineers in the early stages of their careers. DesRoches became a professor in 2008, and in 2012 he was named the Karen and John Huff School Chair and Professor of Civil and Environmental Engineering. At Georgia Tech, he oversaw a $13.5 million renovation of the engineering school’s main facilities and doubled the number of named chairs and professors.

DesRoches serves on the National Construction Safety Team Advisory Committee and chairs the advisory board for the Natural Hazards Engineering Research Infrastructure Simulation Center. He has chaired the ASCE Seismic Effects Committee as well as the executive committee of the Technical Council on Lifeline Earthquake Engineering.

DesRoches’ wife, Paula, is the director of occupational health at Houston Methodist. They have three children: Andrew, Jacob and Shelby (Sid Rich ’23).