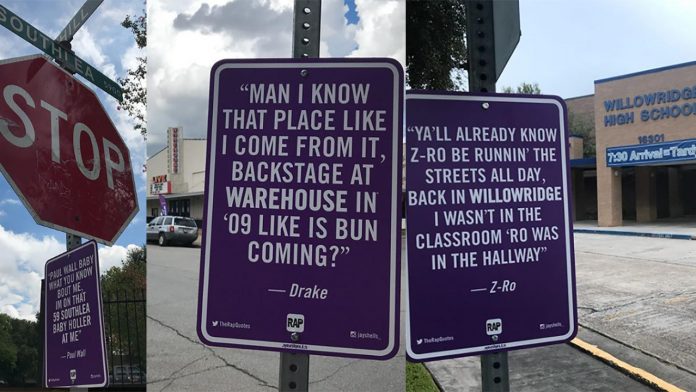 As a nod to Houston’s rap scene, an artist made signs with rap lyrics on them mentioning specific spots in Houston.

Jason Shelowitz, who also goes by Jay Shells, posted all 38 signs last weekend. But they were all stolen within days.

“In Houston, somebody sent me a video. One person stole 14 of them,” he said. “Take one, don’t deprive other people from seeing them or experiencing them. To take that many is super disrespectful.”

The signs have been stolen there, too.

However, he says having pictures of them in their designated spot makes the project worth it.

“We document it really well so it can live on in other ways,” said Shells. “You know, I’m going to compile them all in one master website where everything can live there – photos and videos and more importantly links where people can buy the music.”

The mayor’s office has invited the artist back to town to replace the signs.

“I’m really excited, so that of course will be very different from what I normally do in the sense that it will be legal and sanctioned and we will do it such a way that they won’t be able to be stolen,” he said.