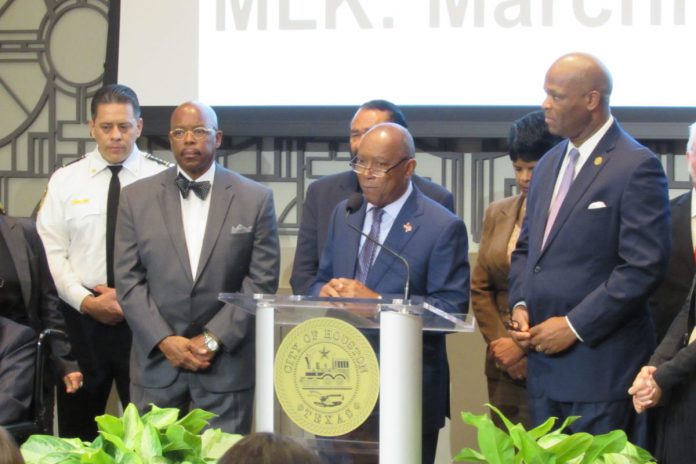 This month Houstonians will join people from across the county to remember Dr. Martin Luther King Jr. Monday, January 21, is the official observance of Dr. King’s birthday, who would have turned 89 years old if his life had not been cut short by an assassin’s bullet.

As the country pauses to remember the late civil rights icon, the City of Houston will begin a new tradition to honor his life and legacy.

This year, the City will partner with the Black Heritage Society to promote the 41st annual Original MLK Day Parade. The parade will be a tribute to Houston’s strength and diversity and unite people of different faiths and cultures from across our community.

From the start of my administration, I have been honest about my desire for our city to have only one MLK Day parade. As the nation’s fourth-largest city, Houston should be known for celebrating the best and biggest MLK Day parade.

Dr. King once said, “the time is always right to do the right thing.” So, in the spirit of Dr. King’s work to unite everyone, I met with representatives of the Black Heritage Society and the MLK Parade Foundation and expressed my hope to combine the groups into one grand, meaningful parade.

Back in 1978, Dr. King’s father even traveled to Houston to give his blessing to Mr. Duncantell’s efforts to preserve his son’s work to unite people and fight for the underprivileged, underserved, and those seeking justice and equality

Sadly, Mr. Duncantell died last year, but during the parade, we will remember his lifelong contributions. There will be a float dedicated in his memory and representatives from various organizations will ride on it.

I am urging all citizens, potential sponsors, schools, and community groups to join me in making this MLK Day parade the greatest ever. The 41st annual Original MLK Day Parade will take place Monday, January 21, starting in front of city hall. This parade will reflect Houston’s diversity and showcase exciting marching bands, colorful floats and convertible cars, along with parade participants who will march or ride on horseback.

As your mayor, I ask you to stand with me and let’s make the 2019 parade, the best parade in the country and the beginning of a new tradition. Considering the cynicism and divisiveness across the country, we should show the nation that our city is a place of peace, unity, and cooperation.

In one of his last speeches, Dr. King said he wanted to be remembered as a drum major for justice, peace, and righteousness.  On January 21, Dr. King will be our city’s drum major. We will March as 1.  We have an opportunity to honor him as a drum major during the 41st annual Original MLK Day Parade.  Let’s show the nation that Dr. King’s dream endures in Houston, Texas.