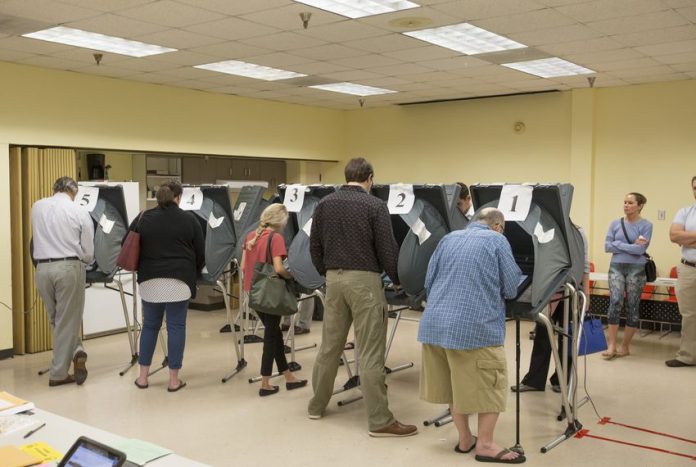 When the Texas secretary of state embarked on its controversial voter citizenship review almost four weeks ago, multiple county officials across the state immediately leapt into action to question the citizenship status of their local voters marked for review.

By Thursday, eight of those counties had agreed to halt those efforts — at least while the civil and voting rights groups that sued the state make their case in court that the review should be temporarily blocked.

The eight counties that sent letters demanding proof of citizenship from some registered voters confirmed they will not cancel any voter registrations based on those notices, according to lawyers for the ACLU of Texas and other groups suing the state on behalf of a group of civil and voting rights organizations.

The agreement was part of an effort to consolidate the three federal lawsuits that have been filed against top state officials, including Texas Secretary of State David Whitley and Attorney General Ken Paxton, as well county election officials. The groups are arguing that the state’s efforts to review the citizenship status of almost 100,000 voters was unconstitutional and discriminated against naturalized citizens and voters of color.

Plaintiffs in each case had asked federal judges in San Antonio, Corpus Christi and Galveston to temporarily block the state and county officials from moving forward with the review as the cases made their way through the federal courts. Earlier this week, the lawsuit filed in Corpus Christi — brought by a group of naturalized citizens, some of whom were flagged for review by the state — was consolidated with the San Antonio-based case filed by the League of United Latin American Citizens and a naturalized citizen flagged by the state.

But lawyers for the Galveston plaintiffs, who named local election officials as defendants, worried consolidating the cases in San Antonio would keep them from making their case for a preliminary injunction before the 30-day countdown ran out on voters who received “proof of citizenship” letters.

Those notices went out in the days after Whitley announced his office was flagging tens of thousands of voters who had told the Texas Department of Public Safety they were not citizens when they obtained or last renewed a driver’s license or ID card. But that data did not account for individuals who became citizens since then.

The Galveston plaintiffs agreed to transfer their case to San Antonio on Thursday afternoon once all eight counties agreed to hold off on any further action. The counties listed as defendants for sending such notices are Galveston, Caldwell, Blanco, Fayette, Washington, Hansford, Harrison and Smith counties.

Lawyers representing those counties indicated some local officials were already in the process of sending out follow-up letters to voters who received proof-of-citizenship letters to indicate their registrations were safe.

That’s on top of the follow-up letters some counties were forced to send after the secretary of state’s office informed them that their original list of flagged voters erroneously included U.S. citizens whose eligibility shouldn’t have been in question.

Plaintiffs in the suit originally filed in Corpus Christi claimed in court filings Thursday that the notices caused frustration and confusion for citizens who received them.

One of the plaintiffs — a naturalized citizen registered to vote in Smith County who identified as Jane Doe #1 — has less than two weeks to meet the 30-day deadline. But she is living in Austin through the end of May and is unable to make the more than five-hour trip to her parents’ home in Harrison County to obtain her naturalization certificate and other paperwork to prove her citizenship.

Another plaintiff — a Wood County resident identified as Jane Doe #2 — said she received a notice of examination without an official letterhead and with the space for a call back number left blank. The letter was also missing the response form that the letter purported should be included.

When she spoke to a county employee by phone, one of them told her the letter might be fake before she understood “the significance of the letter.” She was ultimately able to prove her citizenship after traveling to the county courthouse in person.

Smith County and Wood County are both named as defendants in that case. On Thursday evening, the ACLU also sent a letter to approximately 200 county voter registrars asking them to confirm they will also refrain from sending out notices of examination or canceling any voter’s registration while the lawsuits make their way through the federal courts.

Most counties held off on sending notices while they reviewed their lists, particularly as it became clear the state’s lists did not account for people who became naturalized citizens. But a few counties pressed forward in sending out “notices of examination” that required voters to prove their citizenship within 30 days to remain on the rolls.

That process was laid out in a formal election advisory sent by secretary of state’s office that was meant to serve as guidance on how to review the lists of flagged voters that were distributed in late January.

But this week, top state lawyers and Keith Ingram, the director of the elections division for the secretary of state, said county officials were at fault for moving too quickly in sending out such notices.

In a federal courtroom in San Antonio on Tuesday, an assistant attorney general told Bob Reeves, the voter registrar in Kerr County, that his staff had “acted contrary to state law” when it sent out 68 proof-of-citizenship letters the day the county received its list of voters from the state.

“Some counties rushed and sent notices of examination that they probably shouldn’t have sent,” Ingram said on Wednesday while on the witness stand in San Antonio.

He said local officials had not properly followed his office’s training on how handle the list of flagged voters, which he claimed required them to review their lists for possible citizens before sending out notices.

But some local officials have said they have no way to independently verify the citizenship status of registered voters. In court on Tuesday, Blanco County voter registrar Kristen Spies said her staff believed they “should work the list” because the state election officials in their advisory repeatedly noted they had worked to provide counties with “actionable information” that could be “acted on in nearly all circumstances.”