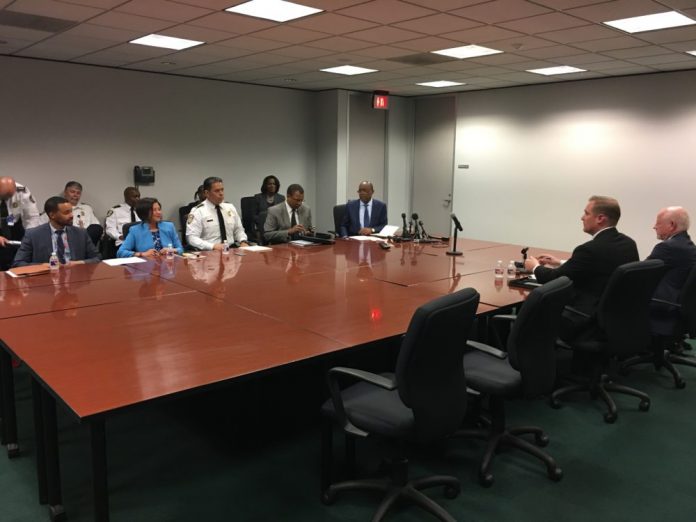 The union representing Houston firefighters say they will agree to a three-and-a-half-year implementation of Proposition B – if the mayor agrees to three stipulations.

Houston Mayor Sylvester Turner and Marty Lancton, president of the Houston Professional Fire Fighters Association, met recently to discuss how to enact the voter-approved measure that requires the city’s firefighters to be paid the same as their Police Department counterparts.

After the private, 30-minute meeting in the mayor’s office, a letter written by Lancton was tweeted from the account for the HPFFA.

“Following our meeting today, this letter confirms our willingness to take to our membership your proposal to implement Proposition B over three and a half years,” the first sentence of the letter, which is addressed to Turner, reads.

The letter said, however, that the willingness is subject to three conditions:

1. Any implementation agreement would need to get final approval from the union and be ratified through a collective bargaining agreement.

2. The union would be provided “complete access” to the city’s financial and budget information to ensure both base pay and incentives are paired to that of police officers.

3. No layoffs or reduction of Fire Department staff would happen before, during or after Prop B is implemented.

In a news release that followed the union’s tweet, Turner published his own letter to Lancton and described Lancton’s letter as “tactics” that “undermine my effort to find common ground.”

“At the end of our meeting, you delivered a copy of a letter,” Turner wrote. “I now know that you had prepared and publicized the letter before our meeting, without the benefit of our discussion. This letter is not consistent with our discussions.”

Turner wrote that he has repeatedly said that he does not want layoffs but, “This requires your agreement on a path forward that the city can afford.

After the letters were circulated to the media, Lancton clarified that his letter was not a recap of what happened in the meeting, but rather an agreement to the mayor’s plan to implement Prop B over a few years.

Turner would not comment on the stipulations in Lancton’s letter, but did not seem to appreciate being handed a pre-typed letter at the end of the meeting.

Turner has maintained that implementation of Prop B would require hundreds of firefighter layoffs in order to cover the 29 percent pay increase.

The parties have agreed to meet again Monday afternoon.

“Following our meeting today, this letter confirms our willingness to take to our membership your proposal to implement Proposition B over three and a half years, subject to the following conditions:

“1. Any agreement with the City of Houston, subject to the final approval of the HPFFA membership, would be ratified thru a CBA (Collective Bargaining Agreement);

“2. Based on provision to us by the City of complete access to the City financial and budget information, the City will implement complete parity with HPD, including both base pay and incentives, and;

“3. The City agrees that no firefighter layoffs or reduction of fire and EMS services would occur before, during or after implementation of Proposition B.

“We await your response.”

“I invited you to meet with me today to discuss phasing in Prop B. We talked about possible common ground, and we agreed to meet again next week to allow the City to do some additional work.

“While I think such ‘tactics’ are not helpful, I will nevertheless be prepared to meet again next week.

“I hope you will refrain from further steps that will undermine my effort to find common ground.

“As I have said repeatedly, I do not want to lay off anyone. This requires your agreement on a path forward that the City can afford.”