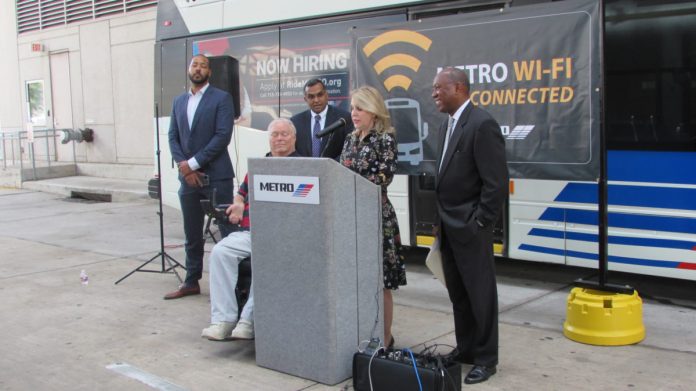 METRO is rolling out Wi-Fi as part of the City of Houston’s partnership with Microsoft that was announced last year.

“Collaborative efforts like this help us enhance basic services for residents and build more resilient communities,” said METRO Chairman Carrin Patman at a kickoff event at the Downtown Transit Center. “We are committed to finding passenger-focused technologies that will put people first and ensure everyone has access to affordable transportation services.”

Houston Mayor Sylvester Turner, who was also at the rollout, said the initiative will prove especially valuable for riders from underserved communities.

“People who may not have internet capability or access at home can simply get on mass transit, get on a bus or get on a train, and be connected to the internet,” he said.

Through a pilot program, Wi-Fi is now available on METRORail’s East End and Southeast Lines. Riders can also use it on select buses on the 54 Scott route and the 204 Spring Park and Ride.

“Obviously resources are one of the issues we’re looking at and how we might address that,” said Williams. “As part of this pilot one of the things you’ll see is we’ll be collecting information from customers about digital communication and how they feel about that, because that could be a great way for us to continue to support this effort for the rest of our fleet.”

To use the new METRO Wi-Fi, riders will be prompted to choose “ridemetro-wifi” from the list of available connections. They’ll then need to enter their email address and approve the terms and conditions.