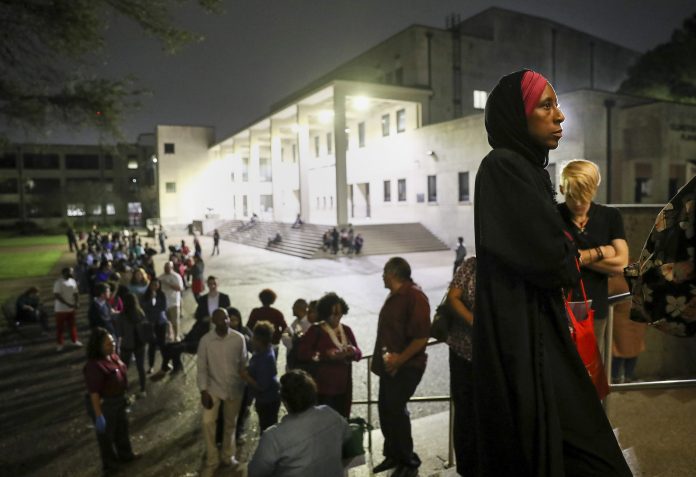 From the sunlit atrium of the science building on campus, former Vice President Joe Biden asked Texas Southern University for an assist.

It was election day eve, and Biden was visiting the university just days after black voters in South Carolina had forcefully revived his presidential bid. That Biden had chosen to spend precious hours at Texas Southern ahead of Super Tuesday seemed to signal he hoped to make the historically black college and the community it represented a nexus between his last pivotal win and the next crucial test of his campaign.

Not even 24 hours later, a university forged during segregation would instead become the epicenter of the challenges and complications often faced by communities of color when they attempt to make themselves heard in Texas. Too few voting machines — and technical failures of aging equipment. Insufficient training of election workers. A shoddy system reporting incorrect wait times that routed voters to crowded locations. Long lines that only grew — initially wrapping through a campus library and eventually out into a courtyard — as voters rushed to jump in line before polls closed.

Wait times for voters in the queue, students and other residents of Houston’s Third Ward extended past the four-hour, then five-hour, then six-hour marks. The last voters at the polling place on campus would ultimately spend nearly an entire workday waiting in line to cast their ballots, almost seven hours after polls closed.

The excessive wait times were not limited to college campuses or even to the Houston area. But Texas Southern University easily saw the worst of it as a result of a sort of perfect electoral storm in which state voting policy ran into local political disputes that were then met by an unexpected surge in Democratic voters — all at the expense of voters in a predominantly black community.

“People fought and died for me to have this right”

The signs that trouble was brewing at Texas Southern University came even before polls closed.

On his way out of Midtown, where he works for a financial corporation, Steven Currie pulled up the Harris County website to find the nearest polling location with the shortest wait time. The website steered him toward the college campus, which was conveniently just 10 minutes away from home.

But as soon as he arrived, he realized something was amiss. Currie stepped into the line around 5:15 p.m., when the stream of voters already stretched out the front door of the library. It would take him an hour just to get inside the building; he had another three hours to go before he made it to the front of the line.

“I got there and I immediately wanted to turn around, but they were handing out snacks,” Currie said jokingly.

Currie wasn’t the only voter who put too much faith in the county’s wait time system, which election workers were supposed to be updating every 25 minutes. Students from the University of Houston looking to avoid the crowded polling site near their campus made the short trek to Texas Southern.

“People were told, especially looking online, they said there would be a two-hour wait line, max,” said Francesa Ervin, a University of Houston graduate student who waited nearly five hours to vote at Texas Southern. “But all of those times were incorrect, so people come after work, and at that point they’re stuck because they can’t make it to another poll.”

The line at Texas Southern moved frustratingly slow. Just 10 polling machines had been allocated for voters looking to participate in the Democratic primary. It hadn’t been much of a problem during the early voting period, when an average of just 50 people came through the polling place a day, county officials said.

But the election day line was several hundred deep even before polls closed. County officials hustled to get 14 additional machines to the university. Other backup machines were allocated to other busy polling sites. Voters waiting in line at Texas Southern clapped and cheered when they saw the extra equipment go by, only to face a standstill soon after. Voting had to be temporarily suspended to get all of the machines synced up.

As the night dragged on — and the presidential race tightened — the Biden campaign ordered pizza and passed out water in hopes of keeping as many voters as it could in line. A saxophone player seemingly hoping to keep up voters’ morale offered a jazzy soundtrack to the affair.

Currie didn’t need any of that to stick it out over four-and-a-half hours, but the university proved to be a poignant backdrop.

“People like my grandparents weren’t able to do this. People fought and died for me to have this right,” said Currie, who is black. “I would feel bad knowing the history of black people and voting and me having the opportunity to do it and then not voting.”

All the while, 10 voting machines sat idle on the Republican side of the polling place.

Months before, the Democratic and Republican county parties had been unable to agree to hold a joint primary, which would have allowed voters to share machines preloaded with ballots for both parties.

The Harris County Democratic Party had agreed to the setup, but the Harris County GOP refused, citing in part the long lines Republican voters would have to wait through amid increased turnout for the pitched Democratic presidential primary.

“We wanted them to do a joint primary where you would just have one line and voters could use all the machines, but they couldn’t agree on that,” said Harris County Clerk Diane Trautman, who was elected to her post in 2018.

Without a resolution, Trautman chose to allocate an equal number of machines for both primaries at each polling site “because we didn’t want to slight anyone,” particularly as Harris moved to countywide voting to free voters from precinct-specific voting. But the move essentially halved the number of voting machines available to Democratic voters on a busy election day. That meant Republican voting quickly wrapped up across the county while Democratic lines made for extra hours of voting at multiple polling places.

In a Wednesday press conference, Paul Simpson, the chair of the Harris County GOP, reiterated that the party was adamantly opposed to joint primaries and sought to preempt any blame for long Democratic lines. To Simpson, Trautman misfired by pursuing a 50/50 split of voting machines across the board instead of using past turnout data to adjust allocations, and he pointed to the party’s recommendation to give Republicans only four machines at Texas Southern University.

“The county clerk refused and failed to follow our suggestion to avoid the lines that we predicted last summer were going to happen,” Simpson said.

(Previous voting patterns weren’t available for Texas Southern University, which was only added as a polling place under Trautman.)

But Lillie Schechter, the chairwoman of the Harris County Democratic Party, said the excessive wait times Democrats faced Tuesday were part of a broader electoral divide in a county that has turned reliably blue in recent years. That change in power has come with voting initiatives that local Republicans have not warmed up to, including a move to countywide voting that allows voters to cast ballots at any polling place in the county on election day.

To keep countywide voting for the primary election, the political parties needed to agree on the distribution of shared polling places. But the map the GOP pushed for on Super Tuesday established more voting centers in the two county commissioner precincts represented by Republicans, Schechter said.

“If you look at the story to say let’s blame the county clerk’s office, you’re missing the big picture here,” Schechter said.

In the aftermath of the wait time debacle, Trautman acknowledged that Democratic voting on Super Tuesday was bogged down by both technical and training issues. The county’s voting machines — the oldest in use among the state’s biggest counties — went down at different points in the night. Election workers weren’t always able to make the adjustments to bring them back into order. Both machines and election workers were “stretched to the max” during the late-night voting slog, she said.

At midnight — five hours after polls closed — voting was again interrupted at the two polling places that were still running, including the Texas Southern University site, when the tablets used to check in voters automatically timed out and had to be rebooted.

Later on Wednesday, Trautman signaled she was assessing what the county needed to fix moving forward — a better method for rerouting voters to nearby voting sites with shorter lines, a wait time reporting system that’s not dependent on busy election workers, pushing for more early voting and, perhaps most notably, purchasing additional equipment for the November election.

“We will work to improve to make things better,” Trautman said.

It’s a sense of urgency that Mimi Marziani, president of the Texas Civil Rights Project, said is long overdue.

The organization, which helps run an election protection hotline, received calls into the early morning Wednesday about inexplicably long lines in polling locations serving mostly black and brown communities and on college campuses. In Harris County, the Democratic voting sites that required additional voting machines late into the evening were in neighborhoods with predominantly Hispanic and black residents.

“This was not a race-neutral collapse of the democratic process,” Marziani said. “This was one that absolutely discriminated against people of color, and we need to be clear-eyed about that.”