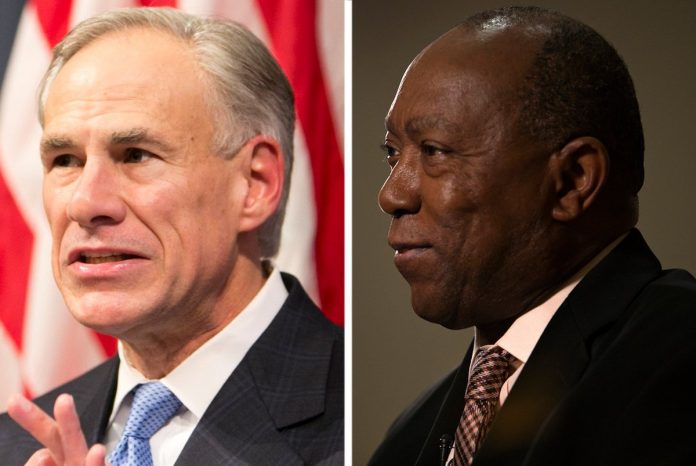 It’s a war of words stretching from Houston to Austin, with homeowners still trying to recover from Hurricane Harvey stuck in the middle.

Houston Mayor Sylvester Turner and Gov. Greg Abbott have been attacking each other on Twitter over federal dollars for housing and flood mitigation.

On Friday, Abbott announced that $4.3 billion in federal funding for flood mitigation would be handled through the state’s General Land Office, rather than being distributed to local cities and counties as other federal monies have been in the past.

On Monday, Turner took to Twitter, calling the action a “money grab.”

On Wednesday, in response to questions from reporters about the back and forth, Turner said, “I have no interest in getting into a beef with the governor or anyone else or making it personal. We all have to work together.”

How many homes has the city actually repaired?

According to the Texas General Land Office, the city of Houston has submitted 107 housing applications, with 57 of those being approved. To date, the GLO says the city has reported four repaired homes and one reconstructed home.

The city of Houston provided a different set of numbers.

“As of Sept. 30, 24 homeowners have been served through reimbursements, rehab and reconstruction with an additional 34 approved for notices to proceed with construction,” said Brittany Hyman, with the City of Houston Housing and Community Development Department.

What’s the reason for the slow progress?

“The way this process has been set up (is), before any city (or) county can proceed, (it) must seek approval from (the) state first and that slows it down,” Turner said.

But Abbott said the city is to blame, not the state’s General Land Office.

On Wednesday, Turner suggested the timing of the governor’s decision and recent criticism were questionable.

“I find it a little suspect that this criticism (is) coming at this time,” Turner said. “This is the silly part of the season — October, pre-election time.”

A spokesperson for Abbott said the announcement had nothing to do with politics and that it was based on meeting a federal deadline.

“In order to stay on schedule to finish the HUD mitigation action plan by Feb. 1, the governor had to make a decision on whether to provide a direct allocation to Houston,” John Wittman said. “The timing was based solely on the need to submit the HUD action plan on time — nothing more. The mayor attacked the governor and state first. The governor simply responded.”