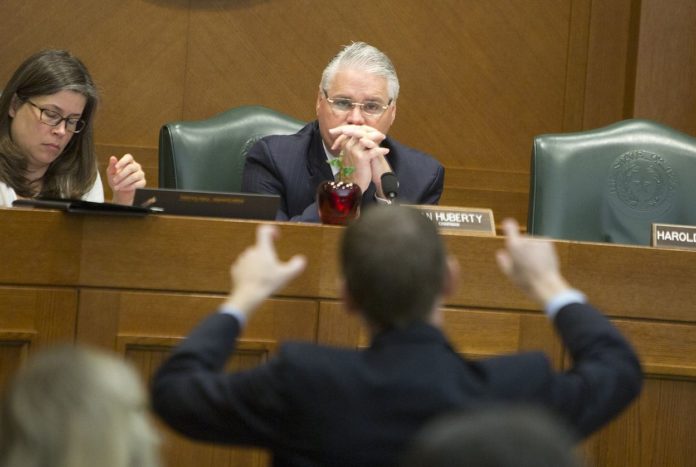 That probably means students’ grades and state test scores will take a hit.

Chambers joined several superintendents Tuesday at a House Public Education Committee hearing to ask the state to waive school accountability ratings, which are tied to how students score on state tests this spring. Texas Education Commissioner Mike Morath expressed concern at the hearing that waiving ratings for schools would lead to teachers and students not being held accountable for teaching and learning.

The Texas Legislature this spring approved an updated system for rating schools and districts using a system of A-F grades, with the first grades for districts set to roll out in August 2018.

“I firmly don’t believe there will be valid or reliable data on how well our schools are doing based on the information that will be available,” Chambers said. He added that the accountability system does not serve as an incentive for teachers to do their jobs.

Morath said the Texas Education Agency would take into account data on how many students and staff members have been displaced and how classrooms have been disrupted when making a final decision on accountability.

He compared waiving state tests for school districts affected by Harvey to refusing to get blood pressure checked by a doctor. “Doctors recommend you get multiple blood pressure tests over a series of months and years to try to get your trend. That’s better than saying, ‘Don’t get it this week,'” he said.

Morath also said moving test dates would delay processing and scoring results and would require some districts to extend their calendars. Getting rid of state testing altogether for Harvey-impacted districts would violate federal requirements and would put federal funding at risk, he said.

The committee’s chairman, Dan Huberty, R-Houston, directed Morath to formally ask the federal government how they would react to delaying state tests.

Most superintendents Morath surveyed said they did not want to delay state tests this spring. But many have asked for districts to be held harmless for low accountability ratings.

“F stands for flood, not a failing district,” said Charlotte Baker, director of the TEA’s education service center in Victoria.

While Aransas County ISD was closed for six weeks to repair Hurricane Harvey-related damage, about 200 students did not go to school anywhere, instead helping their parents clear debris from their homes, said Superintendent Joseph Patek III.

Patek said he’s fine with his students taking state tests but doesn’t want his district to go through being “publicly humiliated” after receiving low ratings. “We just don’t want to be hammered if our students don’t perform,” he said.